A family with a critically ill toddler is pleading with the Canadian government for help to escape a desperate situation. And they have family and many residents in London, Ont. behind them.

The Alahmad family resides in the basement of an abandoned home in Beirut, Lebanon. They have lived there since fleeing war-torn Syria.

Parents Ezzeddin and Midia are struggling to find basic medicine for their son, Tim. His plight and name parallel a modern-day version of the Charles Dickens character ‘Tiny Tim.’

For Ezzeddin, the pain of watching his son suffer from an inability to get care is heartbreaking. 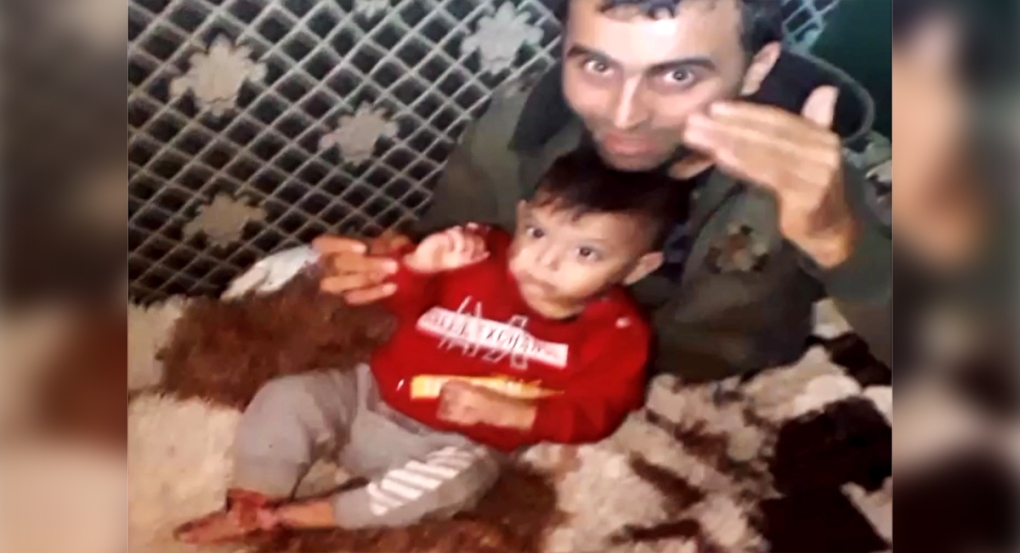 Ezzedin Alahmad is seen with son Tim in a video call with CTV News London from their home in the basement of abandoned home in Beirut, Lebanon. The Alahmad family is pleading with the Canadian government to get them to London, Ont. so Tim can get treatment for severe epidermolysis bullosa, who causes makes skin so fragile is blisters on contact.

With no electricity in their residence, the family managed to charge a phone long enough to speak to CTV News London from Beirut. Using a translator, Ezzedin explained his family's plight.

“For them, what they're saying is that the most important thing for them is Tim’s health and life. So, this is their priority. This is what they want, to find a way to help him as much as they can.”

Help for the Alahmads is coming from all corners of London, including Ezzeddin’s brother, Mustafa.

A refugee himself, he now has a comfortable home and business to provide shelter and a job for his brother once the family arrives. 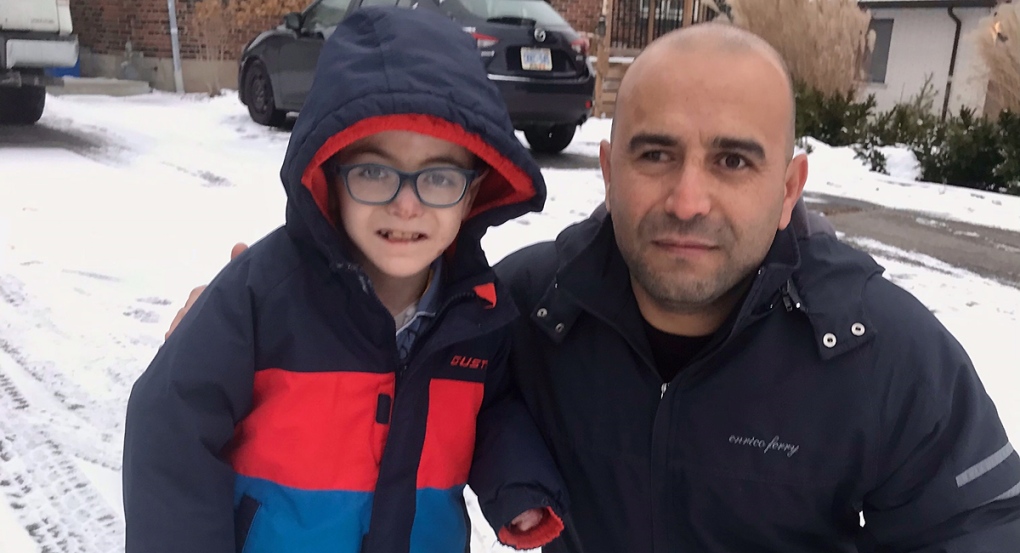 Mustafa Alahmad and his son Amin, who also suffers from epidermolysis bullosa, are seen outside their home in London, Ont. in January 2022. (Sean Irvine / CTV News)

But most of all, Mustafa worries for his nephew.

“My brother and his family, we're just trying to bring them to Canada to get a good life for their son.”

“(Amin) has the same disease. We know that (Tim) will have a difficult life with the disease.”

The Alahmad’s biggest London backer is confident Tim’s life will greatly improve with a move to Canada.

Her name is Martha Macrae.

The banking employee heard about the Alahmad’s plight this past summer and was determined to act. 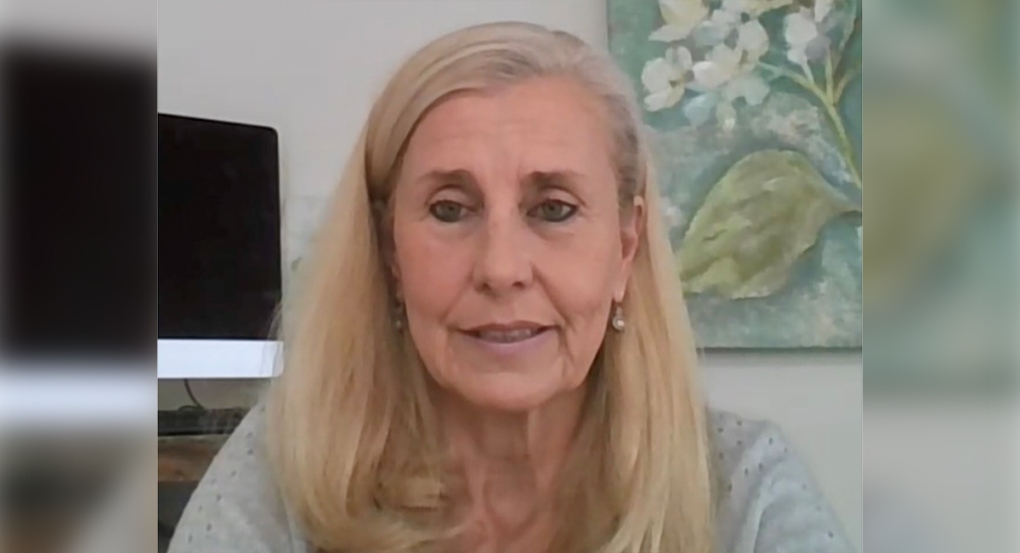 Martha Macrae, who is leading the effort in London, Ont. to help the Alahmad family come to Canada, speaks during a video call with CTV News London.

“I just thought, 'I’ve got to do something.' This is a child, who if an infection comes along, he is going to die. He’s underweight, very susceptible to infections.”

Over several months, Macrae has raised $42,000 for the family. She also secured a car, donated by Oxford Dodge, to get the family to and from Tim’s medical appointments.

But most importantly, she’s secured care.

The care available in Canada is a far cry from what the family has for Tim in Lebanon, as Midia explained through the translator.

“What they are using now is just Vaseline, you know simple Vaseline, to cover the skin so not to stick or to minimize the skin sticking to the bandages.”

Macrae adds, “He is oozing sores constantly and you can't do anything to alleviate his pain and suffering.”

She challenges Canadians to ask themselves, “How would you like to know that your baby is in pain constantly?” 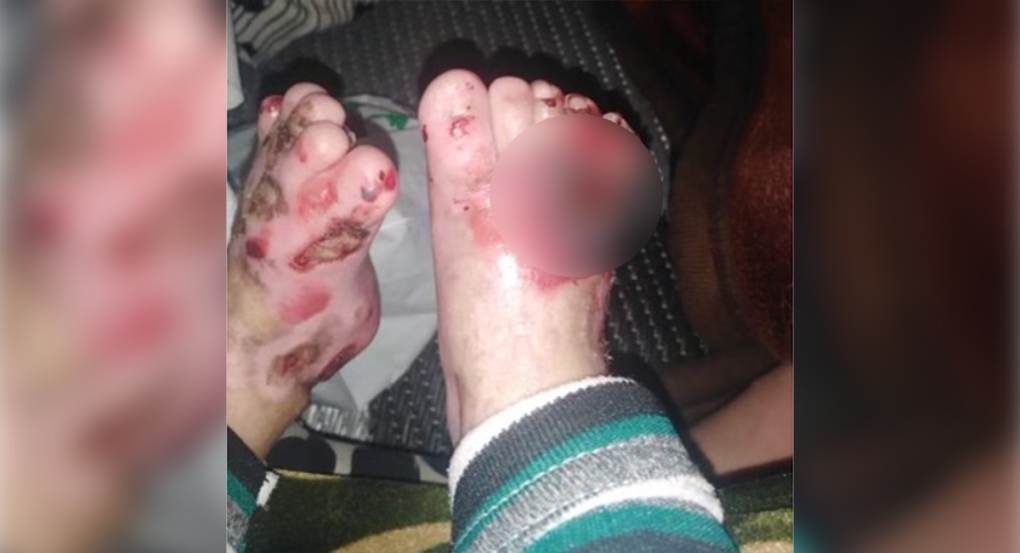 To help the family, Macrae, a former litigator, has reached out to legal friends to prepare an urgent immigration application.

She maintains it includes all the required forms, excluding the Refugee Status Determination document.

Given Tim's condition, Macrae has requested the Alahmads receive an exemption based on compassionate and humanitarian grounds.

The documents were submitted in mid-December. However, Macrae says she became upset a week ago when, she claims, the documents could not be located by Immigration and Citizenship Canada.

She took her concerns to London North Centre MP Peter Fragiskatos office. They are following up on the case.

CTV News London has reached out to Immigration and Citizenship Canada.

We have yet to receive a response to our request for an interview.

“I really hoped that I would at least get an acknowledgment from Immigration Canada that, 'We've got it and we're looking at it.' There's a beautiful little face, and he deserves a life and we've got everything. We have got absolutely everything to care for this family. The only thing that's standing in the way is the green light from our government.”

Meanwhile the Alahmads cling to hope, in the dark, as Ezzeddin explained via the translator.

“It is a dream for them to reach Canada. If that happens, they will be so happy, the only thing that they wish is to get them to Canada, to get the treatment, and have a good life for Tim in the future.”

A good life together in Canada as a family again.

After all, family is what 10-year-old Amin, who struggles with the same disease daily, wants so desperately for his cousin Tim.

To Amin, a reunited Alahmad family “is what love” is all about.