Making beer seems glamorous can be a lot of hard work, and usually isn’t easy on the environment.

“Beer making is a very water heavy and energy intensive process,” said Cowbell Brewery’s Manager of Operations, Chris Van Wieren. “So, when we built out facility, we looked at ways we could reduce our environmental impact, with the ultimate goal of being carbon neutral.”

It’s now four years into operation, and the folks at Cowbell Brewing in Blyth, have exceeded even their own expectations, reaching “carbon positivity” in 2020. That means, the Huron County brewery not only offset the carbon they produced, they also removed additional carbon dioxide from the atmosphere.

How did they do it? On the canning floor they use ionized air, not water to clean their cans. They also use a brew kettle that’s 80 per cent more efficient than a typical one. 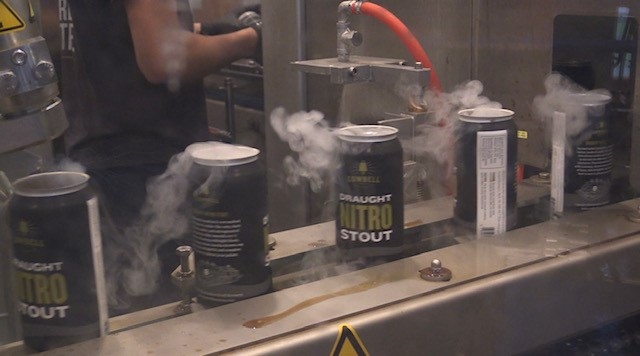 “It saves us approximately 250 litres per brew, which doesn’t seem like a lot, but when you’re doing three brews a day, four days a week, it adds up quite extensively,” said Van Wieren.

“Not only our green living roofs, but the 17,000 trees that we planted on the property, all allow us to now be carbon positive, which I think is a little bit more than most have out there certainly,” said Powell.

Cowbell says they hope to maintain their carbon positive ranking this year and for years to come, as Canada attempts to reach net zero carbon emissions by 2050.

“Maybe this encourages others to take that little extra step to make our planet that much better,” said Powell.