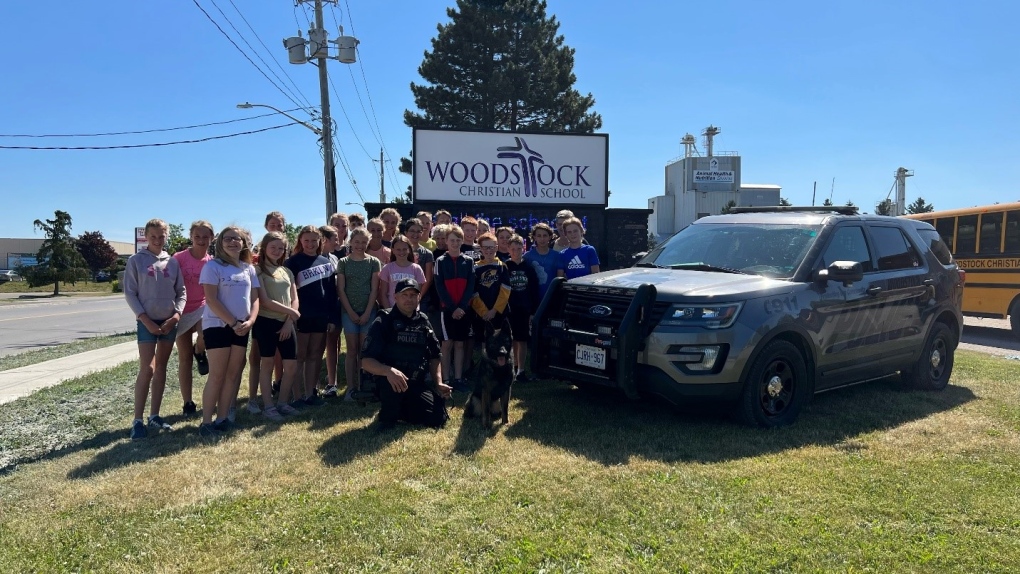 The Woodstock Police Service (WPS) is welcoming its newest four-legged officer to the force.

Police service dog Taz is the latest member of the WPS Canine Unit. He is a three-year-old sable German Shepherd who joined the force from Foxfield K9 in the Ottawa area after he did not work out as a house pet in Quebec.

Taz got his name thanks to a ‘Name the Police Dog’ contest with the Woodstock Christian School and L’Ecole Ste. Marguerite Bourgeois.

On Tuesday, Taz was introduced to the Woodstock Christian School as the school’s grade six class picked his name.

The WPS developed a succession plan for the Canine Unit in 2021 to offer a smooth transition between police dogs.

Police dog Striker has served the City of Woodstock for the last seven years and will now be showing Taz how it’s done.

During this transition, Striker was able to continue servicing Woodstock while Tax trained and completed the required certifications.

With Taz fully in his new role, Striker will be moving toward community service, public education and training officers identified as potential future canine handlers to help maintain his health, WPS said.

The new role will allow Striker to service the community and stay active as he moves toward retirement.

Anyone interested in meeting Striker and Taz can do so at the Southside Park for the Canada Day Touch a Truck event on Friday, July 1.

An Amber Alert was issued for two-year-old Holdan Keewatin Sunday afternoon, after the Regina Police Service asked for public assistance in the search for the child.

The rapid growth of a long-burning forest fire in central Newfoundland has triggered a state of emergency in the area and the expansion of an outdoor fire ban to the entire province.

Air Canada denied a customer complaint and instructed employees to classify flight cancellations caused by staff shortages as a "safety" problem, which would exclude travellers from compensation under federal regulations. That policy remains in place.

Summer of heat waves: A list of some temperature records broken in Canada this year

Canada's summer of heat waves continues this weekend, with warnings issued in four provinces. CTVNews.ca looks at some of the heat records broken already this year in Canada.

Five people, including a suspect, were taken to hospital with serious injuries after a violent incident that drew a massive police presence to downtown Vancouver's main entertainment district Saturday night.

Montreal's Pride Parade has been cancelled due to a lack of volunteers able to guarantee a secure event.

Ukrainian President Volodymyr Zelenskyy said on Sunday that if Russia proceeded with referendums in occupied areas of his country on joining Russia, there could be no talks with Ukraine or its international allies.

How Biden's new approach has led to legacy-defining wins

Over five decades in Washington, Joe Biden knew that the way to influence was to be in the room where it happens. But in the second year of his presidency, some of Biden's most striking, legacy-defining legislative victories came about by staying out of it.

A ceasefire between Israel and Palestinian militants took effect late Sunday in a bid to end nearly three days of violence that killed dozens of Palestinians and disrupted the lives of hundreds of thousands of Israelis.