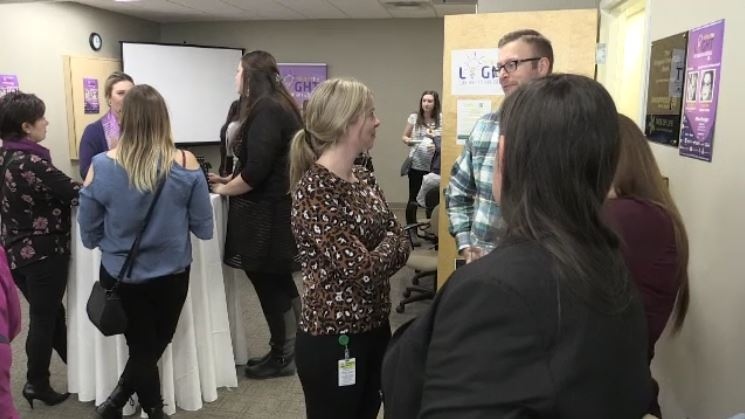 The results of the Shine the Light on Woman Abuse campaign are announced in London, Ont. on Friday, Nov. 30, 2018. (Bryan Bicknell / CTV London)

This year's Shine the Light on Woman Abuse Campaign raised more than $128,000 in donations and sponsorships and prompted 938 calls for help.

Executive Director Megan Walker said in a statement, “LAWC’s team is overwhelmed by the incredible response by Londoners to the Shine the Light on Woman Abuse campaign.

"Londoners have embraced the campaign not only by illuminating the city purple as an expression of support to abused women and girls to an extent we have never seen before, but also financially.”

The London Abused Women’s Centre (LAWC) announced the results of its 9th annual campaign at its wrap-up celebration Friday.

The campaign calls on Londoners to support abused women and girls by blanketing the city in purple to provoke discussion.

The LAWC says the generous donations will allow them to hire two new front-line counsellors to meet the increased demand for service.