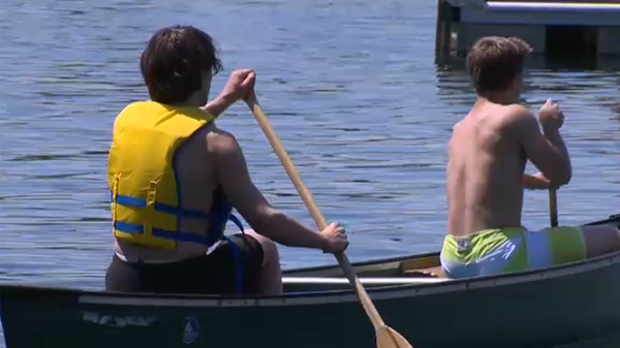 Ontario Provincial Police are reminding the public to be extra cautious around water, after three drowning deaths over the weekend.

“Exercise caution and if you are around open water…don't be over-confident,” says Const. Adam Crewdson of the Elgin County OPP.

A 28-year-old woman died after being found unresponsive in a residential pool Sunday in London’s Masonville neighbourhood.

At The Grotto in Bruce Peninsula National Park, OPP divers recovered the body of a deceased 24-year-old Vaughan man on Sunday, a day after he disappeared following a jump into Georgian Bay.

A 70-year-old man drowned at Wasaga Beach (the second drowning there in a week) and another man died after being pulled unresponsive from Lake Huron just off Southampton on Friday.

“We’re out there with the Marine Unit, and partnering with Beach Patrol and the public health units,” adds Crewdson.

“You have to know where life jackets are and have them accessible. A month ago we had a rescue (in Port Glasgow) and both the father and son had their jackets on. If they didn’t, it would have been a completely different scenario.”

While the backyard death Sunday was an adult, the incident comes during the Middlesex-London Health Unit’s (MLHU) drowning prevention campaign.

They’ve partnered with the Pool and Hot Tub Council of Canada to bring awareness to backyard pool safety.

“A drowning can happen in a second and it’s often a silent event,” says Rhonda Brittan, manager of healthy communities and injury prevention at the MLHU.

“We stress adults staying close to children, having self-closing gates on pools, safety equipment nearby, and fencing that meets local bylaws.”

The OPP agrees, and Crewdson and has a few other tips for swimmers or boaters.

“People need to use extra caution, use the buddy system, don’t mix alcohol and the water, and you'll have a safe time this summer.”