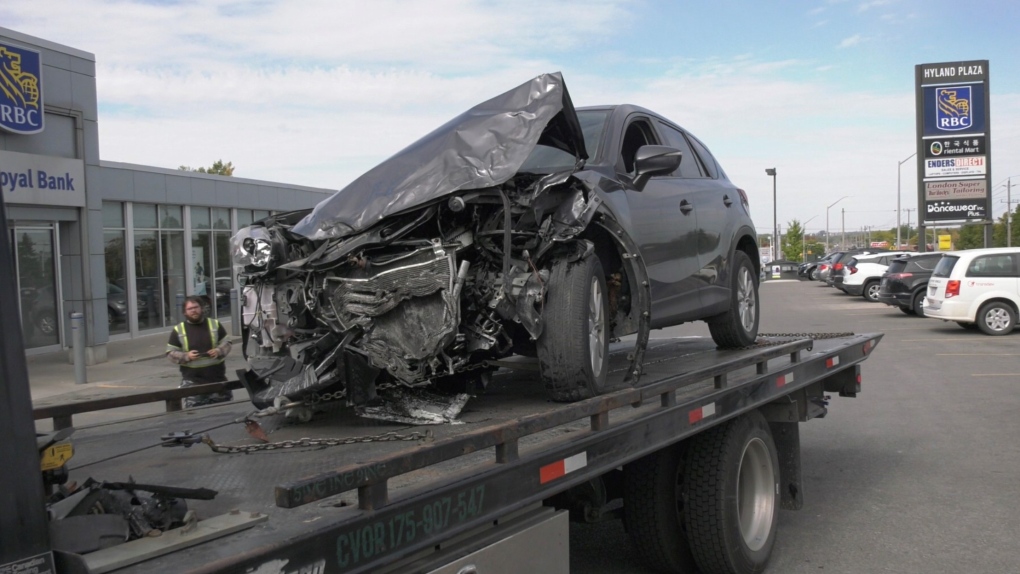 The aftermath of a crash at the corner of Wharncliffe Road South and Commissioners Road East in London, Ont., on Thursday, Oct. 6, 2022. (Gerry Dewan/CTV News London)

The crash happened at the corner of Wharncliffe Road South and Commissioners Road East just before 2 p.m. on Thursday afternoon.

A grey SUV had its front end caved in and the passenger-side, rear tire of a white Ford pick-up truck was sheered off.

The impact also knocked down a traffic light standard, with the pole falling across the turn lane that funnels southbound traffic off of Wharncliffe and into westbound lanes of Commissioners.

The two drivers were the lone occupants of the vehicles, and both were taken to hospital with injuries that are not believed to be life-threatening.

The driver of the SUV was wearing a neck brace as he was loaded into a Middlesex London EMS transport unit.

A woman who works at a nearby bank came to the aid of the victims. She spoke the driver of the pick-up and says he was lucid, but was also clearly in discomfort.

The southbound lanes of Wharncliffe and the westbound lanes of Commissioners were both closed as emergency responders took care of the victims and the vehicles were removed.