It was a busy and dangerous weekend for London fire crews, as they battled a rash of suspicious fires.

One of the fires was at a London Community Housing apartment building, located at 580 Dundas Street.

Fire officials told CTV News London that a fire began in a sixth floor unit, then smoke migrated up to the ninth floor. One female tenant, who didn’t want to be identified, said the experience was overwhelming.

“When the fire alarm went on the other night, it went off, then came back on and I got scared and I was like, ‘Alright, time to take the cats out.’ But even just getting myself together to get out was really difficult because there was already fire on the ninth floor. There was smoke on the ninth floor down by my dad’s unit. My dad won’t come out of his unit, like this is just really scary stuff.” 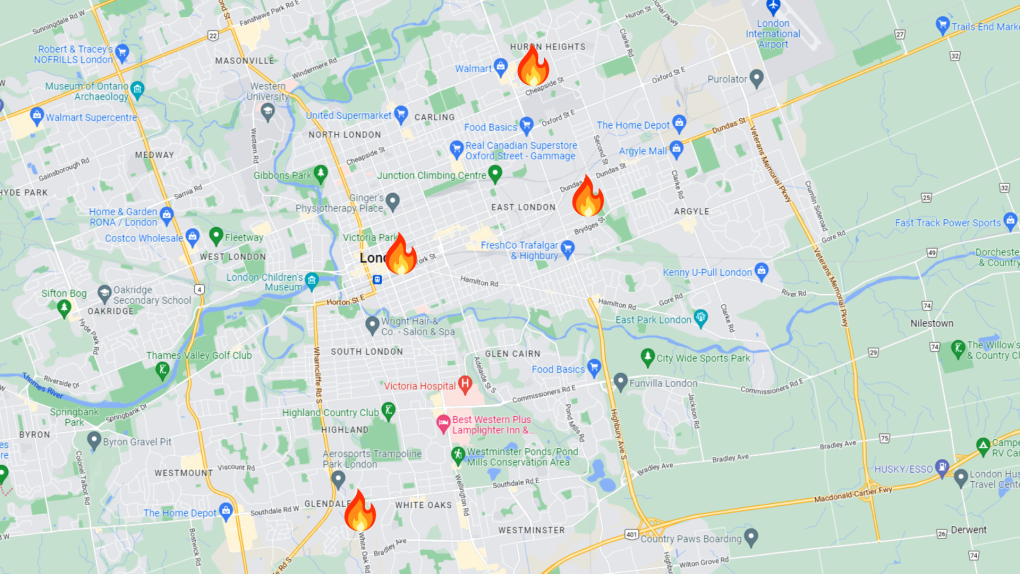 A map depicting four suspicious fires current under investigation that occurred during the weekend of Nov. 25 - 27, 2022. (CTV)

The Dundas fire was one of four over the weekend under investigation by the fire department, or both London police and the London Fire Department.

Late Friday night fire crews battled a blaze at a boarding house on Hale Street. One person was taken to hospital with injuries described as minor. The Ontario Fire Marshall’s office was called in to investigate.

Fire officials said tenants were lucky to get out safely when fire broke out at a three storey walk-up apartment on Godfrey Drive Saturday morning.

And crews battled a massive blaze at an abandoned building Saturday night. Damage in that fire is estimated at between $500,000 and $700,000.

London Fire Department Platoon Chief Gary Mosburger said the department is concerned over the number of suspicious fires in a short period of time.

“This rash of fires that occurred starting Friday night and all the way in to Saturday night is significant concern to the fire department. Our communicators were instrumental in making sure resources were deployed in a proper way as well. With respect to the fires we do know that a number of these are suspicious in nature,” he said.

Mosburger said there were no serious injuries in any of the fires.

BREAKING | B.C. reveals plan for decriminalization of small amounts of drugs for personal use

British Columbia is taking a major step forward in its fight against the province’s deadly overdose crisis by decriminalizing the possession of a small amount of certain illicit drugs for personal use.

Adding milk to coffee may be anti-inflammatory: Danish study