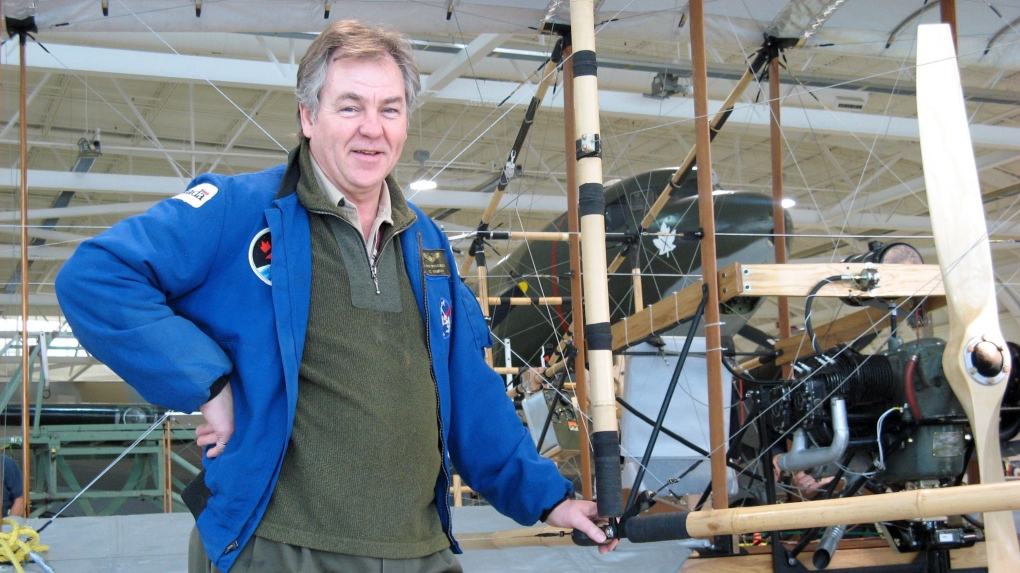 Former space shuttle astronaut Bjarni Tryggvason poses with a replica of the Silver Dart on Friday, Feb. 6, 2009 hours before a planned test-flight in Hamilton, Ont. THE CANADIAN PRESS/Colin Perkel

One of Canada's original six space voyageurs has died.

Bjarni Tryggvason, who was among the first six Canadians to enter the astronaut program, has died at the age of 76, the Canadian Space Agency has confirmed.

Born in Reykjavik, Iceland, Tryggvason grew up in Vancouver. He studied engineering physics, worked as a meteorologist for the federal government and taught at universities in Japan and Australia as well as the University of Western Ontario (now Western University) before joining the space program in 1983.

His one and only mission came aboard the space shuttle Discovery in 1997. On that 12-day mission, he orbited Earth 189 times, performing experiments on the atmosphere and the effect of space flight on the shuttle's equipment.

Although Tryggvason never returned to space, his contributions to the program continued. He helped develop equipment used by NASA, the European Space Agency and the Russian program, including on that country's space station Mir.

He left the space program in 2008, returning to teach at Western.

In addition to being a scientist and inventor, Tryggvason was also a highly skilled pilot. He flew aerobatics, held an Airline Transport licence — the highest rating for a civilian pilot — and held a Captaincy check in the Tutor jet trainer with the Royal Canadian Air Force.

In 2009, he piloted a replica of the Silver Dart, the first heavier-than-air machine to fly anywhere in Canada and the Commonwealth.

Tryggvason held honours from three countries — the United States, Iceland and Canada. In 2003, Canada Post put him on a stamp.

On Tuesday, his former colleagues remembered him fondly.

"Bjarni was a pioneer, a superb engineer and test pilot, and a beloved friend," said former astronaut Chris Hadfield.

"The twinkle in Bjarni’s eye always let you know that he saw the world in a different way. Bjarni saw the world with an engineer’s clarity, a pilot’s perspective, and a humorist’s bemusement."

Robert Thirsk, a fellow member of the astronaut class of '83, called Tryggvason "technically brilliant, operationally skilled, and a dear friend."

"I will sorely miss him." he said.

This report by The Canadian Press was first published April 6, 2022.

The world's attention on Russia's war in Ukraine on Tuesday turned anew to the Russia-annexed occupied Crimean Peninsula, where a mysterious ammunition storage fire and explosions injuring two people was the second incident in a week to shake Moscow's sensitivities.

The fatal film-set shooting of a cinematographer by actor Alec Baldwin last year was an accident, according to a determination made by New Mexico's Office of the Medical Investigator following the completion of an autopsy and a review of law enforcement reports. The medical investigator's report was made public Monday by the Santa Fe County Sheriff's Office along with numerous reports from the FBI on the revolver and ammunition that were collected following the shooting.