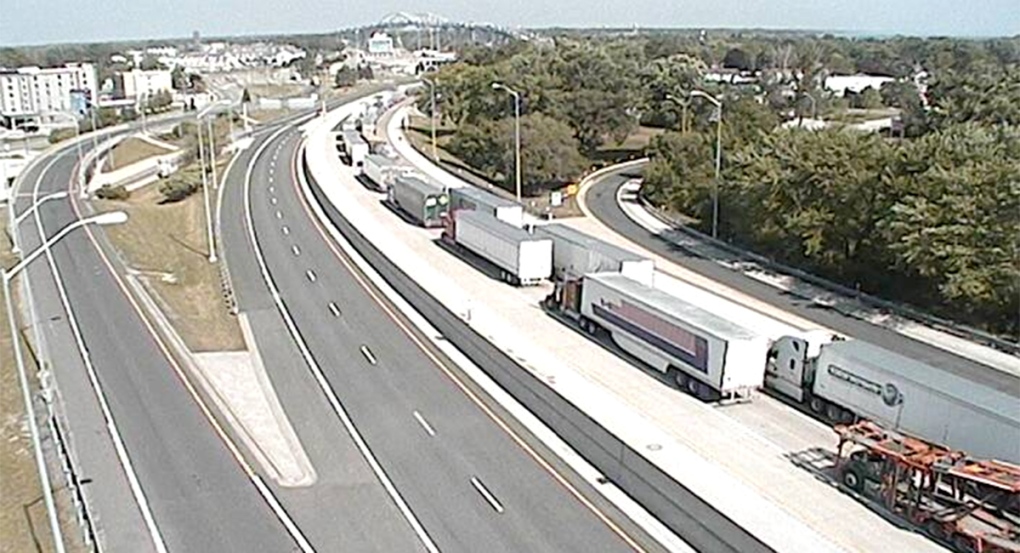 Traffic can be seen backed up on Highway 402 at Front Street in Sarnia, Ont. during a border crossing closure on Thursday, June 10, 2021. (Source: Ontario Ministry of Transportation)
Middlesex Centre, Ont. -

The border crossing in Sarnia, Ont. was shut down temporarily on Thursday morning after the discovery of a suspicious package near the bridge.

U.S. Customs and Border Protection Great Lakes said the Blue Water Bridge closure was due to a suspicious package.

The Port Huron Police Department had to bring in the Michigan State Police Bomb Squad to inspect the package, which was found to be a mechanical device.

The incident shut down all foot, vehicle and boat traffic in the area around the train tracks and scenic turnout north of the Blue Water Bridge where it was found.

OPP had reported a staffing shortage prompted earlier slowdowns at the border crossing.

Traffic on the westbound Highway 402 heading into Sarnia was reportedly extremely slow due to the closure and police were warning drivers to expect delays.

Conservatives say they're against new vaccination policy for MPs

The federal Conservatives—the only caucus yet to confirm how many of its MPs remain unvaccinated—have come out in opposition to the new mandatory vaccination policy announced by the House of Commons. The decision taken by a cross-party committee of MPs that means that as of Nov. 22, anyone entering the House of Commons precinct will need to be fully vaccinated against COVID-19.

A new Delta descendant is rising in the U.K. Here's what to know

British and international authorities are closely monitoring a subtype of the Delta variant that is causing a growing number of infections in the United Kingdom.

Hostage negotiation experts say time is the greatest issue facing the FBI and government officials in rescuing 17 members of a U.S.-based missionary group, including one Canadian, who were kidnapped over the weekend by a violent gang in Haiti.

Queen Elizabeth II has reluctantly accepted medical advice to rest for a few days and has cancelled a trip to Northern Ireland, Buckingham Palace said Wednesday. The palace didn't offer specifics on the decision, but says the 95-year-old monarch is 'in good spirits.'

Ontario Premier Doug Ford said he believes opposition parties are playing politics over his comments on immigrants and said he's been told his remarks were 'bang on.'

More than 470 years before Columbus crossed the Atlantic, Vikings established a settlement in what is now Newfoundland, a new study has concluded.

The Kitchener, Ont., maker of the DivaCup menstrual device has adopted a paid period leave policy offering menstruating workers a day off a month.

Statistics Canada says the annual pace of inflation picked up in September to reach its highest level since February 2003.