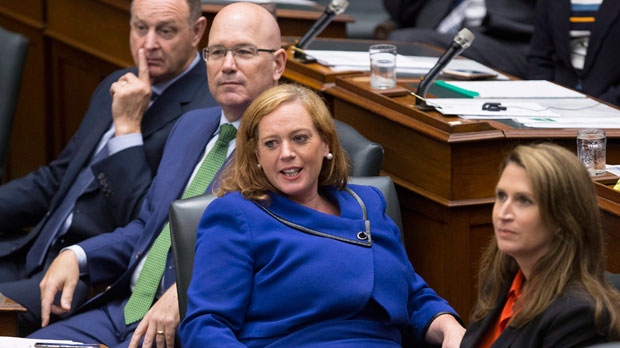 TORONTO -- A group of behaviour analysts acknowledged an apology Friday from Ontario's social services minister for warning them of consequences if they didn't support her new autism program.

The Ontario Association for Behaviour Analysis said it is still calling on Lisa MacLeod to abandon a "one-sized fits all" funding model that will leave many families without enough funding to pay for the level of treatment children need.

"We acknowledge that Minister MacLeod now regrets her comments," the group said. "We are still calling upon the government to reconsider its approach."

MacLeod's apology came late Thursday after the premier was peppered with questions about her remark to the association.

"It's been an emotional time," MacLeod wrote on Twitter. "This is an issue I take very personally, and I apologize if my comments made anyone feel threatened or uncomfortable."

MacLeod has faced calls this week to resign from parents, Opposition politicians and critics, but the behaviour analyst group said it was not interested in seeing the minister lose her job.

MacLeod and her staff requested a quote of support from the association a few days before the revamped autism program was announced last week, the group said.

"(They) indicated that failure to do so would result in 'four long years' for the organization," the association said. "The minister also indicated that if a quote of support was not forthcoming, a communication that behaviour analysts are 'self-interested' would be released from her office."

Initially, MacLeod's office -- which did not deny the comments -- responded to the behaviour analysts' assertion by saying that despite "collaborative dialogues," the association was "unwavering" in its desire to self-regulate, and unwilling to work with the government.

MacLeod announced last week that in order to clear a backlog of 23,000 children waiting for publicly funded autism therapy, families will get up to $140,000 to pay for treatment -- a maximum amount if a child is in treatment from age two to 18. But advocates say intensive therapy can cost up to $80,000 per year.

Critics of the plan slam the fact that it's based on age, rather than individual needs for varying levels of intensity in treatment.

Ford has noted that experts say the early years are the most critical for therapy and suggested families could "front load their payments to really focus on those years of critical care."