From a 181st Street subway station, to retro taxis and a phone booth, London is now sitting in for 1970s New York City in the Apple TV series Improbable Valentine.

“I think is just one of the places that the two main characters, played by LaKeith Stanfield and Clark Backo ,go in search of their child,” says CTV film critic Richard Crouse. “There are also haunted woodlands, there is enchanted Isles as this is a horror mystery fantasy.”

Word of filming in downtown London brought curious onlookers catching their first glimpse of a Hollywood production. Ed Winter has been set up on a chair for days at the corner of Dundas and Richmond streets waiting to see them start rolling. 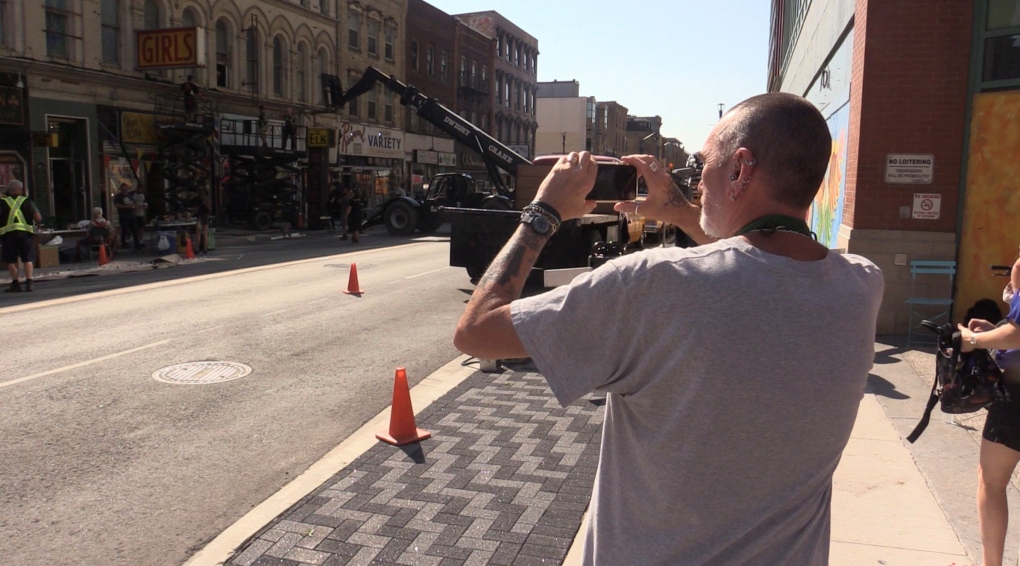 Curious onlookers take photos of the set on Richmond Street as Apple TV’s "Improbable Valentine" is filming in London, Ont. on August 24, 2022. (Brent Lale/CTV News London)
“I’m excited to see how it’s all done and it’s interesting to see how they make a movie,” says Winter, who had been there since 3:00 a.m. and planned to stay all night while they film the scenes.

Others made the trip specifically to see the street transformation.

“I'm a novelist and I was an actor when I was young, so I love love storytelling,” says Drew Murray.

He adds, “I wanted to come down and see what the sets were actually going to look like. I heard that we're going to make it into New York, and I spent quite a bit of time in New York City, so I thought it would be really neat to come and see London turn into New York because I've spent time there.”

His daughter Claire has dreams of being a filmmaker.

“I thought it was just super cool to see live action sets going on,” says Claire Murray, who did acting camps as a child. “That's good learning and just interesting. I knew they were making London into New York, and it’s so cool to see that how much you can change in just a small area.” 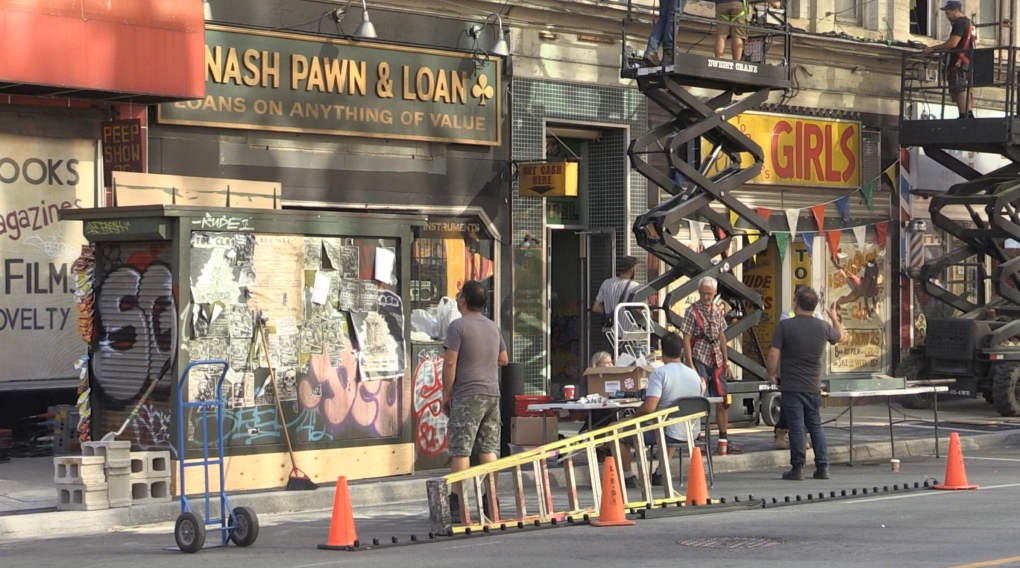 The London Film Office was created a year ago, with the goal of bringing productions to the Forest City – and it’s already paying off.

“It's a massive industry in Ontario,” says Andrew Dodd, manager of Film London. “2021 was the biggest year Ontario has ever had, so our city council wisely recognized that London could be taking advantage of this industry more than we already are. I think we're starting to see that happen.”

Film crews started setting up downtown Tuesday and have compensated some businesses that have had to close over the past two days as their stores are transformed.

“You can feel the buzz on Richmond south of Dundas downtown,” says Aaron McMillan, marketing and events manager at Downtown London.

McMillan adds, “Seeing film crews working with local businesses to create new arts and cultural content on our streets can only be good for the future of our city, especially as we quickly approach London's own Forest City Film Festival in October.”

Crouse believes Apple TV hasn’t kept up with other big streaming services in terms of creating their own content, but they have produced quality shows and films with big name actors. He also feels there are major benefits to cities like London if they can continue to draw production crews. 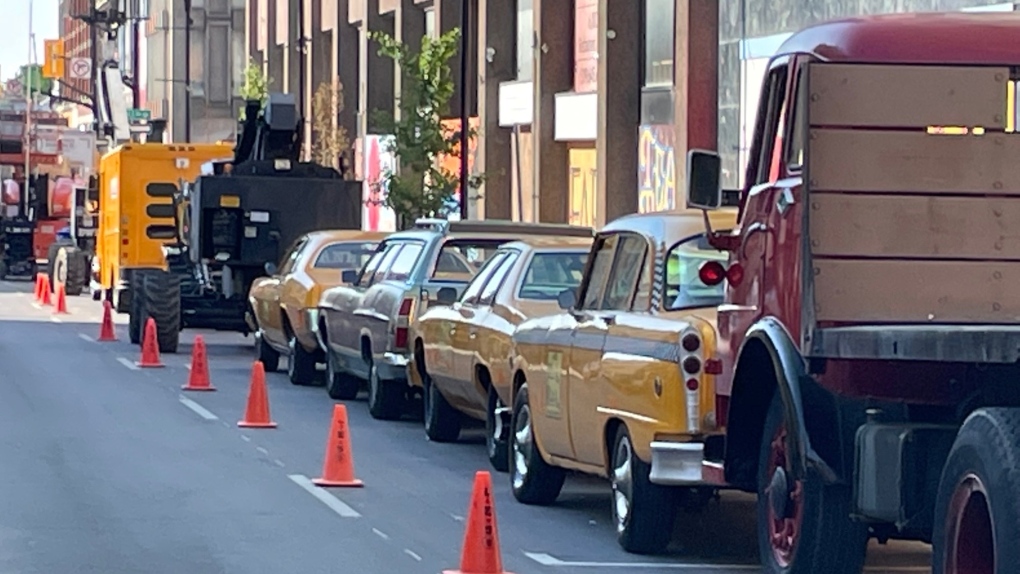 1970s-era taxis are seen on Richmond Street in London, Ont. on August 24, 2022, as filming for Apple TV's new series "Improbable Valentine" begins. (Sean Irvine/CTV News London)
“They can make the town look amazing, so that's good for tourism,” says Crouse. “It's obviously good while the film crew was filming there because they spend money, they rent hotels, they eat in the restaurants, and do all the stuff that you want people to do to keep your economy thriving.”

He cites states like Georgia who offer attractive tax credits, and believes Ontario should make sure to do the same.

“I think that there could be no stopping us because the province is so versatile in what we can offer in terms of locations and backgrounds,” says Crouse.

Those close to the production tell CTV News London that filming will take about 12 hours, but potentially less than one minute of this scene will make the final cut.

Filming is expected to last through the night until close to dawn Thursday, with the series airing in 2023.

What each province, territory is doing on National Day for Truth and Reconciliation

Friday is the second annual National Day for Truth and Reconciliation, also known as Orange Shirt Day. The federal government made Sept. 30 a statutory holiday for its workers and federally regulated workplaces last year.

On this National Day of Truth and Reconciliation, a recent investigation into the death of a 32-year-old Indigenous man is a stark reminder of the ongoing struggle for justice that continues to elude the Ojibways of Onigaming First Nations.

The national chief of the Assembly of First Nations says today's National Day of Truth and Reconciliation is about the survivors of Canada's residential schools and the children who died in them and never made it home.

Indigenous leaders in Quebec are lamenting the fact that priorities for their communities have been largely ignored during the provincial election campaign.

A revived Hurricane Ian set its sights on South Carolina's coast Friday and the historic city of Charleston, with forecasters predicting a storm surge and floods after the megastorm caused catastrophic damage in Florida and left people trapped in their homes.

Russian President Vladimir Putin has opened a Kremlin ceremony to start the process of absorbing parts of Ukraine into Russia, defying international law.

'Justinflation' can't be said in the House of Commons, but MPs are trying anyway

The Conservatives' cheeky term for inflation under the Liberals has got some MPs into trouble in the House of Commons, where saying 'Justinflation' has been deemed verboten.

W5 | Invasive pigs, liberal tears and the appreciation of nature

Saturday at 7 p.m.: CTV W5 investigates the war with wild pigs, a destructive invasive species that has spread throughout the world and now threatens to move into some Canadian cities.