'You need to come get your children immediately': Parents jarred by sudden closure of childcare centres

'You need to come get your children immediately': Parents jarred by sudden closure of childcare centres

It was a call that stunned hundreds of parents, "You need to come get your children immediately. We will explain when you get to the centre."

That's the message Shayla Galenza says she received around 3 p.m. on Thursday.

She had two children, an infant and a three-year-old, attending the Kidorable Children's Care Centre on Jim Ashton Street, in the area of Oxford and Second Street.

It's one of two Kidorable locations in London. The second is on Trafalgar Street near Vancouver Street.

Both locations now have notices from the Ministry of Education posted in the front entrance, saying the centres have been closed due to concerns raised, citing a "protection order" to immediately stop providing child care — It's the same notice parents were handed as they came to pick up their children.

Galenza says when she arrived, staff were greeting parents outside holding clear plastic garbage bags with their children's belongings inside. 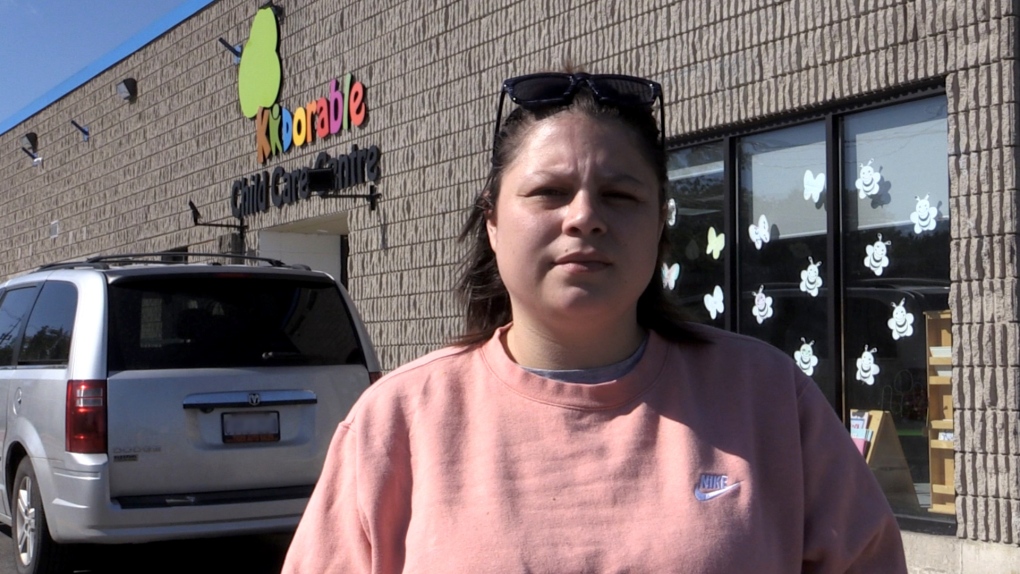 Parent Shayla Galenza outside the Kidorable Child Care Centre at 35 Jim Ashton St. in London, June 17, 2022. (Gerry Dewan/CTV News London)"The staff has been absolutely remarkable," said Galenza. "I can't say how thankful we are for the staff and how far out of their way they've gone to make their kids feel safe and at home."

Parents say, along with ministry representatives, London Police Service members and City of London officials were also on hand as children were being picked up.

Galenza says she actually had to leave her work, along with her manager who also had a child at the Jim Ashton Street location, in order to pick her children up.

She told CTV News the challenge now is finding other daycare alternatives. The notice from the Ministry of Education includes a website and a contact name and number.

According to Galenza, the Kidorable locations opened in October and she was thankful they did, because she was already facing two-year waitlists at other daycare operations.

She said parents are trying to support each other, with some offering to take in other children while new spaces are identified, but she's frustrated by the lack of information about the issues related to the Kidorable closures and why there couldn't be more notice.

Social media sites have been flooded with speculation, questions and concerns about the Kidorable Child Care Centres. 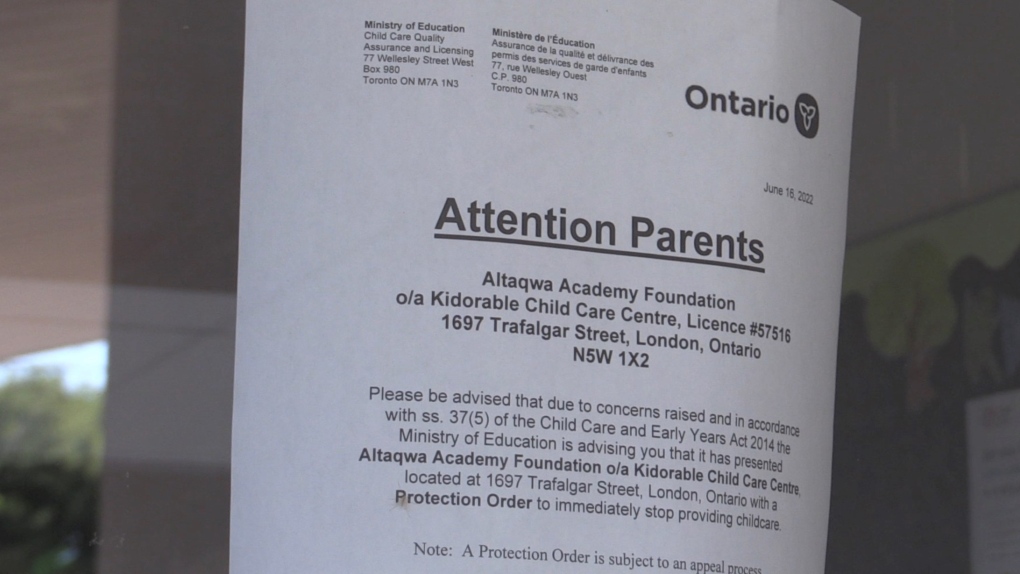 A Ministry of Education notice posted in the front entrance of the Kidorable Child Care Centre at 1697 Trafalgar St. on June 17, 2022. (Gerry Dewan/CTV News London)

The notice from the ministry was issued to the Altaqwa Academy Foundation, operating as Kidorable Child Care Centres.

The Academy Foundation headquarters are identified online as being at a Churchill Avenue location.

A private school is run at that location and a spokesperson inside says the school has no link to the Kidorable Child Care Centres.

CTV News called the phone number tied to Kidorable. The line has a generic answering machine message. A message was left but so far there has been no response.

According to a letter a parent shared with CTV News London, the Ministry of Education cited Kidorable Child Care Centre’s infractions such as: every child not being supervised by an adult at all times, permitting physical restraint of a child for purposes of discipline or in lieu of supervision, not implementing policies and procedures in respect to sleep, not maintaining the proportion of employees that must be qualified, among others. 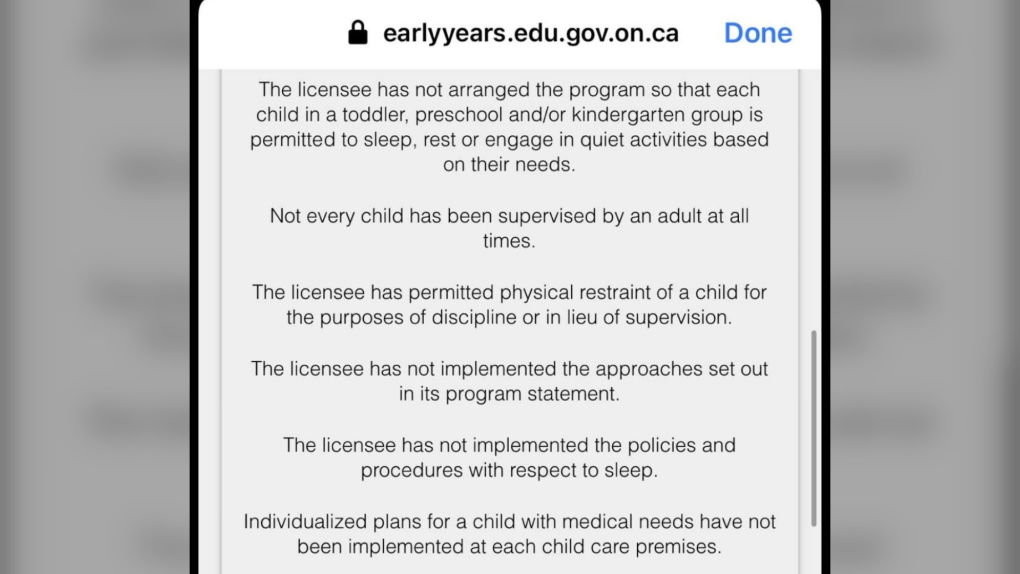 A list of Kidorable Child Care Centre infractions from the Ministry of Education. (Courtesy: Parent) 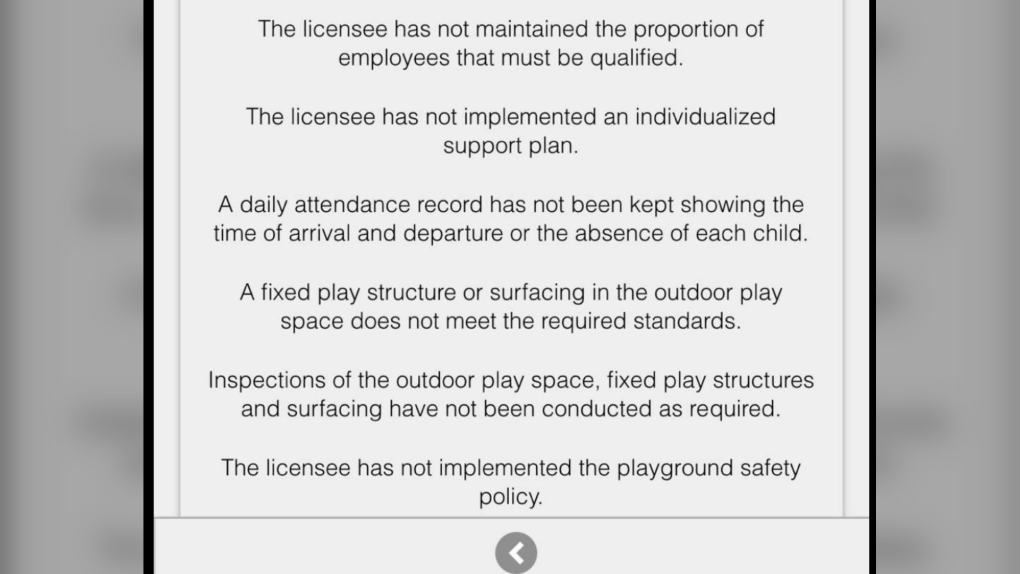 “The health and safety of our children are of paramount importance,” the statement said. “That is why Protection Orders — the immediate suspension of operations — are issued to ensure the safety and protection of the children in care. We will never waiver from our duty to protect our most vulnerable among us, our children.”