'You could save a life': Campaign to make fire extinguishers in vehicles mandatory in honour of late St. Thomas mother

ST. THOMAS, ONT. -- It's a promotional video that aim to possibly save someone's life in future.

"Having a fire extinguisher in a vehicle is a good idea," says Bill Todd, chief fire prevention officer for the St. Thomas Fire Department.

Todd was taking part in a video produced by Tony Bendel of Bendel Productions.

The goal is to hopefully prevent a tragedy similar to the one that killed St. Thomas mother Cindy Devine in early October.

Devine was pinned in her vehicle after a head-on crash on Highbury Avenue, and killed when her car went up in flames.

"Cindy was a close friend of mine for a lot of years," says Bendel. "It was something I felt I needed to do, and could do in hopes of saving someone else. I've started a campaign on fire extinguishers making sure everyone has one."

Bendel contacted Todd, who was aided by Malahide Fire Chief Brent Smith. They described what types of fire extinguishers are best and did a demonstration on both outdoor and vehicle fires.

"You need to understand the size of the fire you can put out with the extinguisher and how to do it properly so you dont hurt yourself," says Todd. "Firefighters have full bunker gear and breathing apparatus because of the fumes coming off a vehicle." 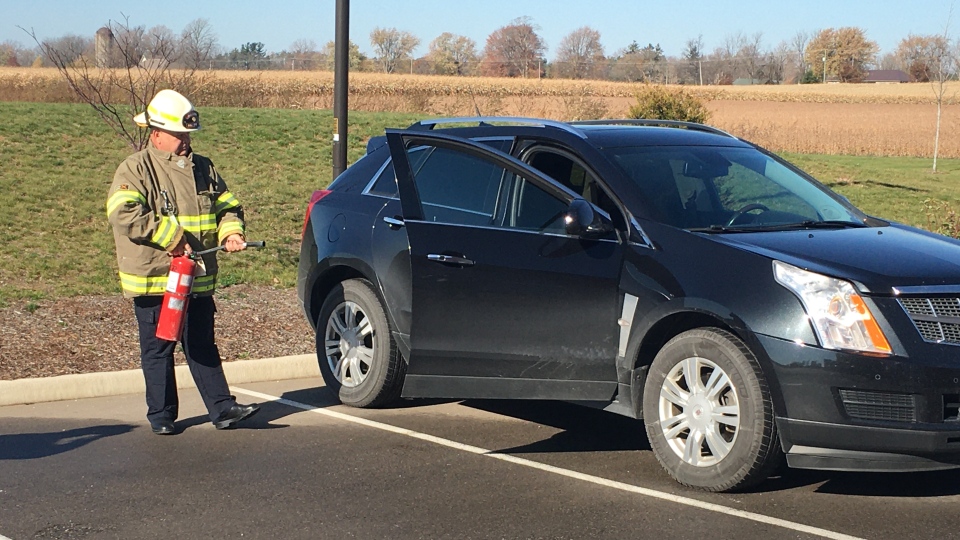 Todd recommends a multi-purpose extinguisher, which will put different levels of fire.

"We always say use multi-purpose extingisher it will put out an A,B, and C type fire. We reccommend a 2A, 10BC classifiacation that will put out a good size fire. It can be kept in [the glove] compartment or trunk area."

Todd also recommends having a knife, scissors or a seatbelt cutter in your vehicle to free yourself if your car goes on its side or roof.

Bendel is using the fire extinguisher segment as part of a mini-documentary on the life of the late Cindy Devine.

"I'm also trying to get government to get a private members bill and make it law," says Bendel.

"I want every new vehicle come to come equipped with fire extinguishers. Maybe we can save someone else, because what happened to Cindy was horrific."

Todd agrees and was happy to take part in the informative production.

"If we come away with everyone safe and we can save a life, we've done a good days work," says Todd.