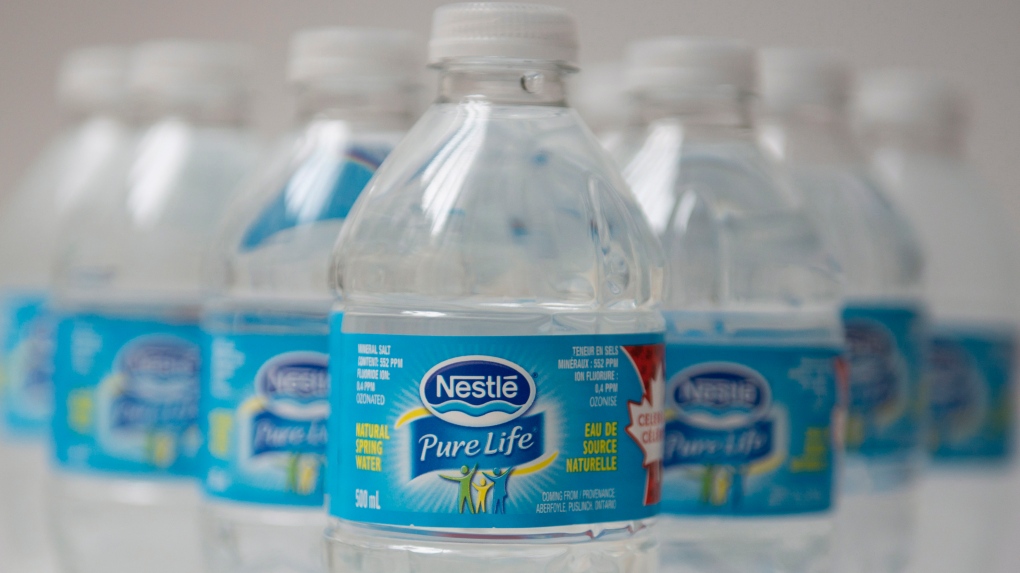 TORONTO -- Ontario plans to increase its charge for water-taking permits for bottled water companies in the new year, but Premier Kathleen Wynne says she wants a bigger discussion on the future of the entire industry.

The province charges $3.71 for every million litres of water taken, on top of a permit fee of $750 for low- or medium-risk water takings.

Wynne wants to see that charge increased, but said price won't be the only factor as the Liberal government considers new rules for bottled water companies.

"Absolutely that needs to go up, but the reason that we wanted a bit more time to look at this is, is that enough? Is it enough that the price just goes up?" she asked in a year-end interview with The Canadian Press.

"I really think we need to look at the culture around bottled water. Why are we all drinking water out of bottles when most of us don't need to?"

There are situations where bottled water is needed because of old pipes or other problems, said Wynne.

"But do all of us need to be using bottled water?" she asked. "I think we need to have a bigger look at the whole industry, and our role in regulating it."

Wellington Water Watchers, a group of environmentalists in the Guelph, Ont., area an hours' drive west of Toronto, agreed that increasing the price for permits for bottled water companies won't address concerns about water use.

"It's not just about increasing the price," said Water Watchers chair Mike Nagy. "No price would be high enough to stop some companies from doing what they're doing because the profits are so high."

The government should counter aggressive marketing by bottled water companies with public information campaigns about the safety of tap water, added Nagy.

"It's been about 20 years of solid marketing, making out as if this was a healthy product -- healthier than the sugar drinks that they also market -- and it's time that the government take back that voice," he said. "We believe the province has failed to educate the public that there is no lower environmental footprint and healthier thing to do than drink tap water and bring a reusable container with you."

Wynne imposed a two-year moratorium on permits for new or expanded bottled water operations after Nestle purchased a well that the small but fast-growing township of Centre Wellington wanted for its drinking water supply.

The province also posted proposed new regulations for bottled water companies with existing permits for public comment until the end of January.

They would limit the period of water-taking permits to one to five years, down from the current maximum of 10 years, and require companies to issue weekly reports on how much water they are permitted to take and how much they actually take.

There would also be stricter scientific requirements for water taking permits including studies on the cumulative impact of the practice, and reviews looking at the anticipated impacts of climate change such as more severe droughts.

Stronger regulations of the bottled water industry and more public education about the safety of tap water could help the province achieve its goals to reduce greenhouse gas emissions and the impacts of climate change, said Nagy.

"Climate change, droughts, carbon emissions are all tied to this very wasteful industry," he said. "It should be part of that holistic discussion about people not just rejecting products that are wasteful, but also reconnecting on a personal level with their water, and we mean that very sincerely."

"The industry cannot absorb additional costs," spokeswoman Elizabeth Griswold said in an email. "Increasing cost for Ontario companies would also serve to open the market for imported bottled water, and many Ontario jobs would be lost."