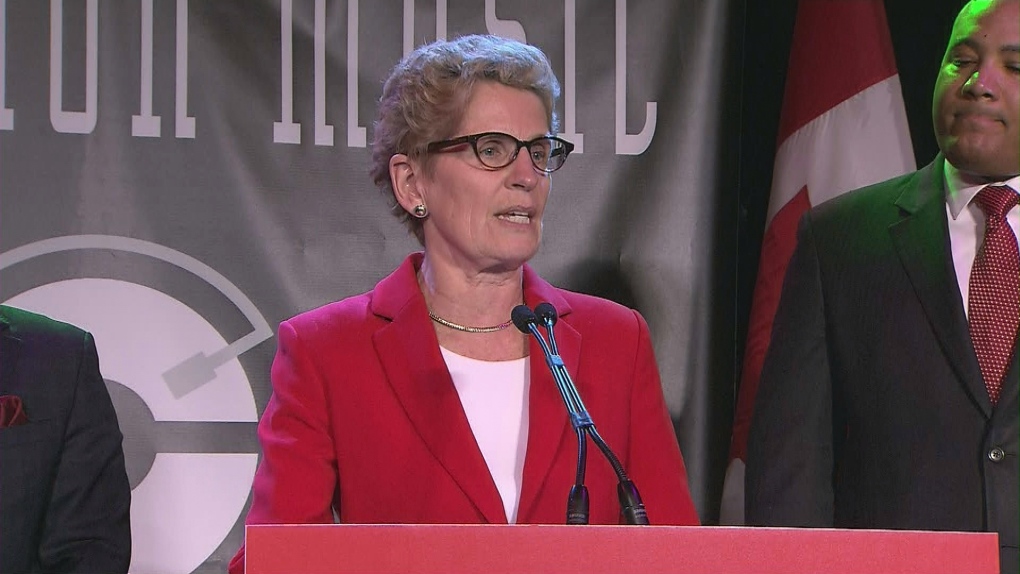 TORONTO -- Premier Kathleen Wynne says her libel case against two Progressive Conservatives is not the reason her government is making changes to a bill on so-called SLAPPs -- strategic lawsuits against public participation.

Wynne filed a $2-million lawsuit last spring against then-PC leader Tim Hudak and energy critic Lisa MacLeod over comments that Wynne "oversaw and possibly ordered the criminal destruction of documents" related to the $1.1-billion cancellation of two gas plants prior to the 2011 election.

Media website Canadaland noted Tuesday that a reintroduced Liberal government bill to crack down on SLAPPs, which use the threat lawsuits to intimidate opponents, no longer contains a provision applying it to lawsuits already before the court.

Retroactivity was not contemplated before the bill was initially introduced and the change in the bill was made for two reasons, Wynne's office said. It's not fair to change the rules for litigants who are already in the middle of cases, and because debate on the first version of the bill "became clouded by the interests of a few current litigants," a spokeswoman said in a statement.

"For these reasons, and no others, the bill was updated," wrote Zita Astravas.

MacLeod said during question period this week that Wynne's lawsuit against her qualifies as a SLAPP, meant to muzzle the opposition.

"Her support for anti-SLAPP legislation flies in the face of everything she has done in the last year," MacLeod said in the legislature, referring to various government scandals, including a criminal investigation into the actions of two Liberals in the run-up to a byelection in Sudbury, Ont.

Wynne said Wednesday that her lawsuit against Hudak and MacLeod is in place because she believes "it's really important to debate the truth."

"The allegations that were made against me by Tim Hudak and Lisa MacLeod were untrue," she said after an unrelated announcement. "They know that they're untrue."

NDP Leader Andrea Horwath said she doesn't know why the Liberals took retroactivity out of the bill, but she "wouldn't put anything past them."

"If the Liberals want to play a game that's going to help them politically with their own lawsuits, I don't know whether that's the case or not, but I want to see this legislation put forward," she said after question period.

"It's the principle of having a democratic system where the top dollar...doesn't win the day each and every time."

Environmental groups have applauded the anti-SLAPP legislation, saying it would provide an effective mechanism to allow for early dismissal of such lawsuits so defendants don't have to incur unnecessary legal expenses.

The Green Party of Ontario is calling for the retroactive provision to be restored.

"I'm tired of the political games that continue to prevent passage of strong legislation to protect people and organizations that speak out in the public interest to protect our communities and democracy," party leader Mike Schreiner said in a statement. "Liberal efforts to weaken this bill are a slap in the face of democracy."