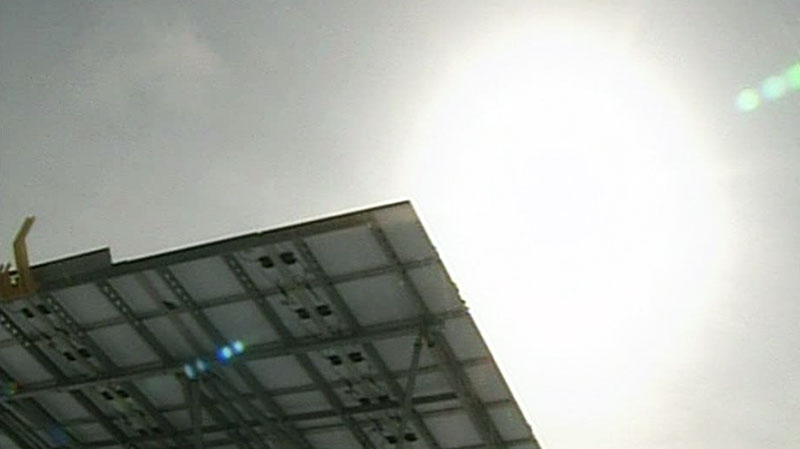 Auditor general Bonnie Lysyk's annual report said consumers are paying $9.2 billion more for 20-year wind and solar power contracts signed by the Liberals with private generators than they would have under the old procurement system.

The auditor also found Ontario pays 3 1/2 times the price for solar power than the average in the United States, and twice as much for wind power.

"There's a cost associated with getting out of coal, of putting more renewables in place, and we've got other jurisdictions looking to Ontario as a model for how to do that," said Wynne. "I'm happy to defend the changes that we've made."

"You only have to look at other jurisdictions that are struggling with air quality, with particulate matter in their air, with families that don't feel they can let their kids play outside," she said. "I know we weren't in those serious straits, but the fact is we have reduced our pollution in this province."

Wynne, who made two separate trips to the climate change talks in Paris, said Ontario is leading the way in the battle against greenhouse gas emissions, noting Alberta will take 15 years to stop burning coal to generate electricity.

"That is going to be a transition for them and there will be a cost associated with that as there was here in Ontario," she said. "So we are ahead of the curve in terms of the decisions that we have made, and we'll continue to work to lower the cost of electricity."

Ontarians have a strong, reliable electricity system because of the investments made by the Liberal government, insisted Wynne.

"We now have clean renewable energy and we should be celebrating the fact we don't have an under-supply," she said.

Progressive Conservative Leader Patrick Brown said Wynne "missed the point of the auditor's report," which was that Ontario could have reached the same green energy goals without the extra $9.2 billion cost.

"I think the government has mishandled this so badly, and because of political interference and mistakes, every Ontarian will pay $12,000 more for electricity," said Brown.

The New Democrats said the Liberals have given green energy a bad name because of their meddling in the electricity system and the ham-fisted implementation of the policy that pitted neighbours against each other locations of wind and solar farms.

"The auditor general said we spent $9.2 billion more than we had to spend for green energy programs," said NDP Leader Andrea Horwath.

"Instead of having a province that's 100 per cent behind renewable energy and dealing with climate change, we have chaos, anger and people very, very angry at green energy, and that's a failure of the Liberals."