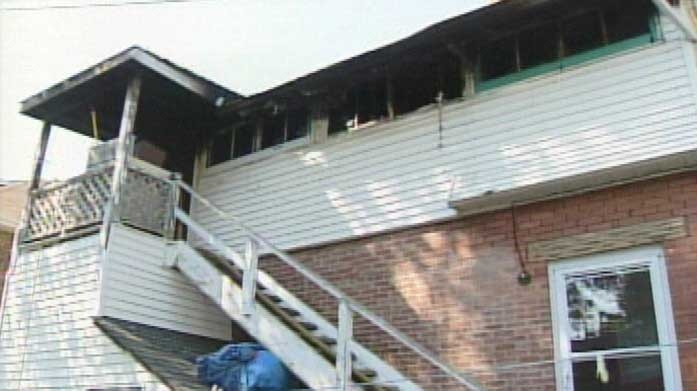 Damaged caused by a fire at 70 Centre Street, where David Farro was found dead, is seen in St. Thomas, Ont. in August 2010.

A St. Thomas woman has been sentenced for her involvement in the 2010 death of Jason Farro at an apartment at 70 Centre Street.

Police say 40-year-old Farro, a Toronto-based comedian, died of blunt force trauma before the house was set on fire on Aug. 29, 2010.

On Thursday, Tina Joy Ellis pleaded guilty to being an accessory after the fact to murder and was sentenced to four years in jail, a 10 year weapons prohibition and was required to submit DNA.

In May, Daniel Mark Belding pled guilty to second degree murder and was sentenced to life in prison with no possibility of parole for 16 years.

Belding and Ellis, who lived in the same building where Farro’s body was found, were initially arrested and charged with first degree murder and arson in connection with the death.

Police say Thursday’s sentencing concludes the court process for Farro’s family, who continue to grieve his loss. Farro was the father of four children.