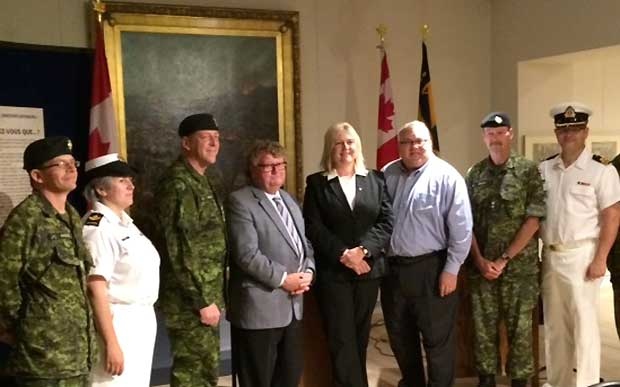 MPs Ed Holder and Susan Truppe, centre, pose for a photo at the Wolseley Barracks in London, Ont. on Monday, July 27, 2015. (Office of MP Susan Truppe)

The federal government has announced a $10-million investment for London's Wolseley Barracks and the HMCS Prevost training facility in Port Stanley.

MPs Susan Truppe and Ed Holder announced the investment - $7.9 million for Wolseley Barracks and $2.1 million for HMCS Prevost - in London on Monday and added that work will begin this summer.

Truppe said in a statement, "The benefits of these projects extend well beyond the men and women of the reserves - it will also provide economic benefits to the local community, support trades and create local jobs here in London.”

The money will be used to "remodel, repair and upgrade infrastructure in place at the Wolseley Barracks, HMCS Prevost, as well as the HMCS Prevost training facility in Port Stanley."

At Wolseley Barracks, the work is expected to include extensive remodelling, repairs and upgrades to the Armoury's 'A Block' - a heritage building - and upgrades to the washrooms and HVAC systems, as well as other necessary maintenance work at four other buildings.

The parking lot at HMCS Prevost will be replaced, and it will also undergo HVAC and washroom upgrades, while the training facility in Port Stanley will see exterior and interior renovations.

It was also announced that demolition work at Wolseley Barracks is being suspended until further local consultations can be done, and the 'O Block' will be kept as "it has been deemed to have operation requirements."