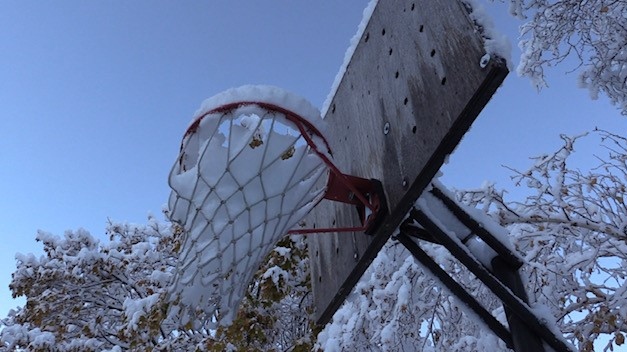 A low pressure system moving over the Ohio valley is spreading a swath of snow across the area. Environment Canada has issued a winter weather travel advisory as heavy snow will fall into the evening causing low visibility.

The out of season storm will generate close to 5cm of snow in London.

The temperature Monday evening will hold steady at the freezing mark, allowing the snow to briefly stick around.

Snow continues Monday evening, but the intensity will wind down, tapering off to flurries before midnight.

The city isn’t breaking any cold temperature records, but it is the coldest April 18 recorded in the last five years.

A late season snow is not a welcomed site, but not uncommon. Normally in April the London areas averages three to four days of snow.

The greatest snowfall on this day dates back to 1947, when London received 7.9cm.

A cold northwest wind will develop Tuesday and you can expect clouds and light flurries early in the day.

The day-time high will hold well below normal, with the temperature climbing just a couple degrees above freezing.

Skies will clear Tuesday night, the low will drop to minus 5C with a wind chill close to minus 10C.

Sunshine will make a comeback Wednesday, and temperature will recover back into the double digits.

If the cold weather and snow fall has turned your day up-side down, don’t worry. You can break out the shorts and gardening gear this weekend.

A major pattern shift will develop as the high is set to hit 20C by Saturday.