"Outreach workers around the city were able to approach people with a simple message, you've been selected to have a warm indoor space for tonight, how can we help you get there?”

Campbell says 15 people used the trailers, and they were up to 17 early Thursday.

Another 13 people have been named and are expected to use the shelters by end of the day.

This is the first such site to be launched in the city.

The new shelters, built with a collection of trailers, provide space for 30 to sleep, plus washroom access and daytime space.

Outreach staff and volunteers from Winter Interim Solution to Homelessness (WISH) are on site to assist those using the space.

Space Space London Executive Director Julie B. says, “This is the beginning for the WISH coalition, it's amazing what organizations can do, big and small, when they come together, and prioritize people that are sleeping outside, and the most oppressed people in general. There's still upwards of 100 people sleeping outside in this freezing weather. So we as a community need to continue to care, for everybody.” 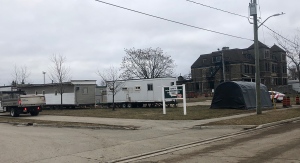