TORONTO -- Decorated short story writer Alice Munro says she never thought she would win the Nobel Prize for literature, but calls being the first Canadian-based author to secure the honour "quite wonderful."

The 82-year-old wordsmith was named Thursday as the 110th Nobel laureate in literature and only the 13th woman to receive the distinction.

"I knew I was in the running, yes, but I never thought I would win," Munro said by telephone when contacted by The Canadian Press in Victoria.

She added that she was delighted and "just terribly surprised."

An official at the Swedish Academy, which selects Nobel literature winners, called Munro a "master of the contemporary short story" when her name was announced in Stockholm and greeted with applause from a packed room.

Considered one of the world's greatest living writers of short stories, Munro's recent works include the 2009 collection "Too Much Happiness," which was nominated for the Governor General's Literary Award and a Writers' Trust Award, and 2012's "Dear Life," which won Munro her third Trillium Book Award.

She has also previously won the Man Booker International Prize for her entire body of work, as well as two Scotiabank Giller Prizes (for 1998's "The Love of a Good Woman" and 2004's "Runaway"), three Governor General's Literary Awards (for her 1968 debut "Dance of the Happy Shades," 1978's "Who Do You Think You Are?" and 1986's "The Progress of Love"), the Commonwealth Writers' Prize, the inaugural Marian Engel Award and the American National Book Critics Circle Award.

She had been considered a perennial contender for the Nobel Prize in literature, with British-based betting company Ladbrokes positioning her as the second-most likely recipient this year behind Japanese master Haruki Murakami.

"On behalf of all Canadians, I would like to congratulate Alice Munro on being the first Canadian woman to receive literature's most prestigious international honour," Prime Minister Stephen Harper said in a statement. "Canadians are enormously proud of this remarkable accomplishment, which is the culmination of a lifetime of brilliant writing.

"Ms. Munro is a giant in Canadian literature and this Nobel Prize further solidifies Canada's place among the ranks of countries with the best writers in the world."

In a statement issued by Penguin Random House Canada, Munro said she was pleased the award would shine a spotlight on Canada.

"I'm particularly glad that winning this award will please so many Canadians," she said. "I'm happy, too, that this will bring more attention to Canadian writing."

McClelland and Stewart Publisher Ellen Seligman called the Nobel a "momentous day for Canada and Canadian writing, and a thrilling honour in recognition of the extraordinary and enduring talent of Alice Munro, one of the great writers of our time."

Born in 1931 in the southwestern Ontario farming community of Wingham, Munro later moved to Victoria with her first husband, with whom she had three children.

The couple eventually divorced and Munro moved back to Ontario. She eventually remarried Gerald Fremlin, who died earlier this year.

Munro is beloved by readers around the world for her striking portraits of women living in small-town Ontario.

When she won the prestigious Man Booker International Prize in 2009, prize judge chair Jane Smiley noted that: "the surface of Alice Munro's works, its simplicity and quiet appearance, is a deceptive thing, that beneath that surface is a store of insight, a body of observation, and a world of wisdom that is close to addictive."

The American novelist Jonathan Franzen has said she is the "remote provider of intensely pleasurable private experiences."

He has also said: "This is not a golfer on a practice tee. This is a gymnast in a plain black leotard, alone on a bare floor, outperforming all the novelists with their flashy costumes and whips and elephants and tigers."

Of her own work, Munro has said: "I want to tell a story, in the old-fashioned way -- what happens to somebody -- but I want that 'what happens' to be delivered with quite a bit of interruption, turnarounds, and strangeness. I want the reader to feel something is astonishing -- not the 'what happens' but the way everything happens. These long short story fictions do that best, for me."

Three years ago, in an interview at Toronto's International Festival of Authors, Munro revealed she'd been through a battle with cancer but did not provide specifics.

And this past June, she told the National Post she was "probably not going to write anymore."

Upon learning she'd won the world's most prestigious literary prize, she was succinct: "It's just great," the author said Thursday.

"At this moment I can't believe it. It's really very wonderful." 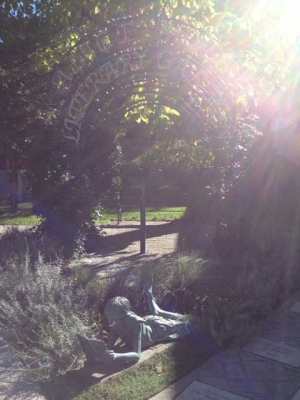 Sorry, we are having issues with our commenting system server. Please try again later!