Widening the road for rapid transit will require some Dundas Street property owners to part with 15 feet (or more) of their land— beyond the existing sidewalk.

Recently, property owners were contacted by city hall about acquiring the land necessary to add dedicated bus lanes and a centre median as part of the East London Link rapid transit project.

If a sales agreement can’t be reached, the city will pursue expropriation.

Lou Fatibene, owner of Dundas Automotive Repair, says taking away about 18 feet of his property will make it virtually impossible to run his business.

Widening the road has always been part of the city’s rapid transit plan along the stretch of Dundas Street near Ashland Avenue.

However, car lots and repair shops in the area say the ability to park and maneuver vehicles is a critical part of operating their businesses.

“We basically won’t be able to back a truck out of that garage door safely without hitting pedestrians on the new sidewalk,” he worries. 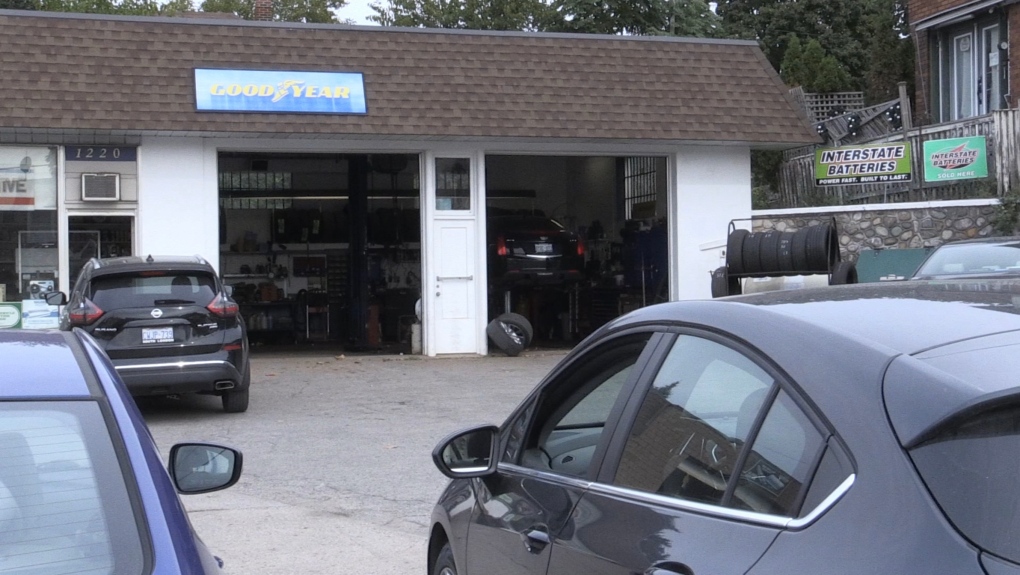 Dundas Automotive Repair has been approached to sell a vital part of its parking lot in London, Ont. on Thursday, Oct. 6, 2022 (Daryl Newcombe/CTV News London)

Homeowners east of Ashland Avenue have also been approached by the city to sell about 15 feet of their front lawns.

They’ve expressed concern that only a few feet of grass and a large retaining wall will separate their porches from the sidewalk and road.

Director of construction and infrastructure Jennie Dann says the city has modified the design to reduce the amount of land acquisition.

“We do need property to accommodate the two transit only lanes and the centre median, and that’s consistent with the approved EA (Environmental Assessment). Then what happens is those land needs increase at intersections,” she tells CTV News.

On Wellington Road, several properties were purchased in their entirety and cleared by the city because the buildings were in direct conflict with upcoming construction.

Director of realty services Bill Warner says existing structures don’t impede construction along that stretch of Dundas, but the new position of a property line can impact the city’s financial offer.

“If it does come so close that there is a change in the value of the overall property after we consider acquiring the partial property, we will also consider that in the offer of compensation,” Warner explains.

Offers are based on independent professional appraisals.

Warner adds that land acquisition in the area is still in the early stages.

But Lou Fatibene says faced with selling a vital piece of his property to the city or expropriation— he feels trapped.

“They are basically shutting me down from what I do,” Fatibene says. “They’ll put five people out of work.”

BRT construction in the area will likely start in 2024.

NEW | 'Not looking for a fight' but nothing off the table when it comes to Alberta sovereignty act, PM Trudeau says

Statistics Canada says there were 2.8 million fewer commuters in 2021 than in 2016, as the pandemic drove a shift toward remote work.

In the wake of southern B.C.’s first major snowstorm of the season, more than 100 schools in Metro Vancouver and the Fraser Valley are keeping their doors closed Wednesday.

Ontario's auditor general says the province wasted 38 per cent of COVID-19 vaccine doses between February and June because it overestimated demand for boosters.

The verdict is in: A four-day work week is good for business. After six months, most of the 33 companies and 903 workers trialling the schedule, with no reduction in pay, are unlikely ever to go back to a standard working week, according to the organizers of the global pilot program.

A member of the Royal Family's household has left her role after making 'unacceptable and deeply regrettable' comments about race and nationality to a woman at a grand reception at Buckingham Palace, a spokesperson said on Wednesday.

Canada has most educated workforce in G7, according to StatCan

Slightly over 57 per cent of workers aged 25 to 64 have a college or university credential in Canada, making it the most highly educated workforce of G7 countries, according to Statistics Canada's 2021 census data.