He attributes the change to an increase in the amount of warm days and shorter cold seasons over the past few years, making southwestern Ontario a more welcoming climate to all sorts of wildlife.

“It started along the Great Lakes and it’s those migratory birds getting over the lakes, landing. At that point the ticks are falling off and starting to grow their own population in and around those areas,” said Hogeveen. 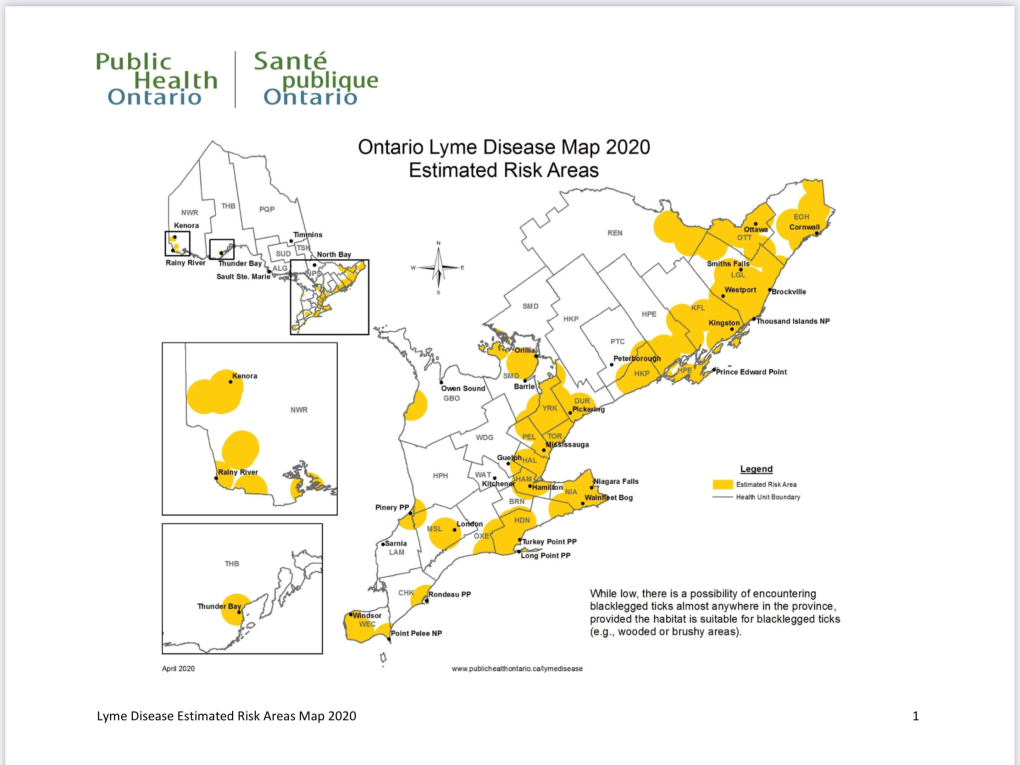 You should check on your pets as well.

Dr. Caroline Von Waldburg, veterinarian for Sears Animal Hospital, says she has seen an increase in patients acquiring tick bites just by being out in the backyard.

“When you’re checking for them on your pet, you’re going to want to look for any kind of warm fold areas so in their armpits, in their inguinal region, their ear flaps and between toes,” said Dr. Von Waldburg.

So it’s important to keep the grass and shrubs in your backyard short. Hogeveen also suggests keeping things like piles of wood away from your property. That’s where chipmunks and mice like to settle but they may be carrying ticks.

If you find a tick on yourself or your pet, use a pair of tweezers to grasp as close to the base of the head as possible and gently pull the insect away from your skin.

If you’re concerned with the type of tick you’ve found, take a picture and send it to etick.ca and they’ll advise you on what your next course of action should be.

Ont. and Que. scramble to recover from thunderstorm that left at least 8 dead

BREAKING | 8 people dead after storm rips through Ontario; tens of thousands without power

Canada's Public Safety Minister Marco Mendicino insists the once unknown fate of Michael Spavor and Michael Kovrig was not why the government delayed its decision to ban Huawei technologies from Canada's 5G network.

Ahead of his one-year anniversary on the Supreme Court of Canada this July, Mahmud Jamal spoke with CTV National News National Affairs Correspondent Omar Sachedina to reflect on his past year on the bench.

Kim Sigurdson, a Métis philanthropist from Manitoba, travelled to Ukraine in early May on his own dime to bring support to displaced Ukrainians.

Afghanistan's Taliban rulers on Sunday began enforcing an order requiring all female TV news anchors in the country to cover their faces while on-air. The move is part of a hard-line shift drawing condemnation from rights activists.