What a difference a year makes: London airport struggles to recover

LONDON, ONT. -- Recovery is not expected at the London International Airport anytime soon, as air travel continues to plummet.

But Mike Seabrook, the facility's president and CEO, says his focus is slowly turning to the gradual reopening of the skies.

His optimism comes at a low point for the airport, “What we’ve got now is probably as low as we’re going to get, in terms of passenger volume,” Seabrook says.

Inside the terminal, travellers can no longer get a snack at the coffee shop, but in a sign of the times, they can buy a mask from a vending machine.

“Yeah, it’s strange. It looks like I’m the only traveller here right now." 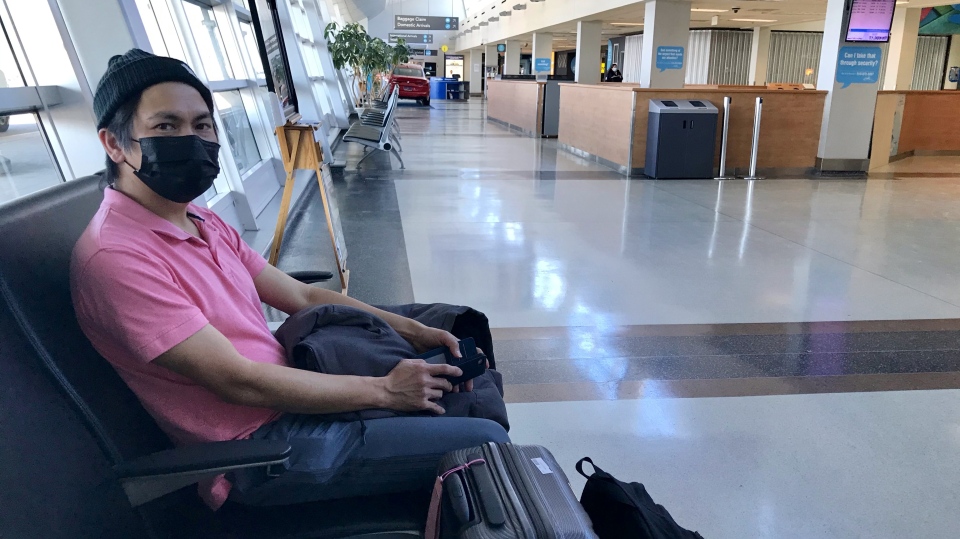 Lloyd Tabule, the only passenger inside the terminal at London International Airport several hours before the next scheduled flight in London, Ont., Wednesday, Jan. 6, 2020. (Sean Irvine / CTV News)

Overall, passenger volumes at the airport are just 25 per cent of normal, but Seabrook acknowledges it is a hard fall from one year ago.

“Last year at this time it was our busiest month, really in the history of the airport. We had an abundance of charters, Vegas flights, Florida, Caribbean. It made a big difference for us and we have lost all of those.”

To financially cope, the airport’s $50-million capital budget has been halted. As a result, a runway renovation and a planned expansion to the terminal are officially pushed back.

Meanwhile, the workforce here has been cut by 25 per cent.

But with the arrival of vaccines, Seabrook says there is hope on the horizon.

He predicts a return to the air will begin with rapid COVID-19 testing already being tried out at larger Canadian airports. He says industry experts predict it will take three to five years to return to pre-pandemic passenger levels.

However, in the case of London airport, Seabrook is convinced carriers will be back sooner, given his facility's ability to make them money.

“Their expectations are to be back here at those levels. Now, it will take a while to build it, but it will be at levels prior to the pandemic.”

And 'prior to the pandemic' is a time Lloyd Tabule says he “wishes” to see again soon.

A year ago, he was sitting on a beach in Mexico, unaware of what the world was about to endure.