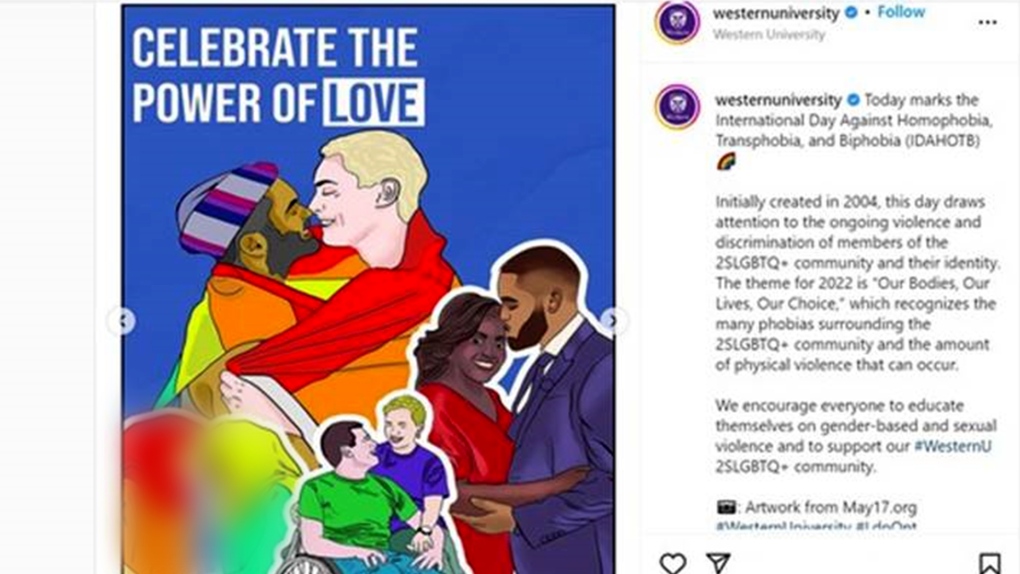 Western University received backlash on Instagram after posting this image to mark International Day Against Homophobia, Transphobia and Biphobia, May 17, 2022. CTV News has blurred the image. (Source: Western University/Instagram)

Western university has removed an image posted online after backlash that generated some controversy.

The school says the post was meant to support the LGBTQ community and has acknowledged that part of the image was upsetting for some members of the Muslim community.

The post was made to mark the International Day Against Homophobia, Transphobia and Biphobia and shows two women in hijabs about to kiss.

Many commented on the image saying it was “inappropriate” and that the illustration being portrayed was “disrespectful to the Muslim community.”

Opiyo Oloya, the associate vice president for equity diversity and inclusion at Western issued a statement, “Our intent with the post was to demonstrate Western’s unwavering support for the 2SLGBTQ+ community on the International Day Against Homophobia, Transphobia, and Biphobia.”

“We are fully committed to continuing to advocate for and acknowledge the voices of those within the 2SLGBTQ+ community. We also understand the image was upsetting for some members of the Muslim community,” said Oloya.

“Our concern is that we were not consulted about this,” said Aarig Anwer, an Iman at the London Mosque told CTV News. “Now the conversation is about how do we move forward and make this an opportunity.”