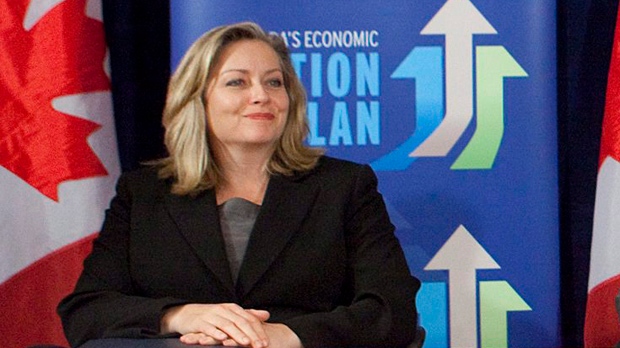 Linda Hasenfratz is seen during a meeting in Ottawa on Tuesday, Feb. 9, 2010. (THE CANADIAN PRESS / Pawel Dwulit)

LONDON, ONT. -- Western University chancellor Linda Hasenfratz is no longer a member of Ontario’s COVID-19 vaccination distribution task force after news broke that she travelled outside of Canada in December.

Hasenfratz is well known in the London community as she has served as Western’s University’s chancellor since Oct. 2019.

A Globe and Mail report first brought to light that Hasenfratz traveled to Barbados in December.

That was around the time that she had joined the task force for Ontario along with Western bioethicist Maxwell Smith.

She has since apologized for travelling outside of the country.

The province has not indicated who might replaced Hasenfratz on the task force.

Western has not commented on her travels or resignation from the task force.

This is just the latest high-profile member of the London community to be caught up in controversy over international travel.

Earlier this month news broke that former President and CEO of London Health Sciences Centre Dr. Paul Woods had made several trips to the United States during the pandemic.

Woods has maintained that he followed protocols and that the hospital was aware of his plans to travel.

However, he was let go from his position, a decision that prompted a lawsuit from Woods.

Following the lawsuit the Chair of LHSC resigned after claims that she was told of Woods’ travel plans and had agreed to them.