'We walk in their honour': Healing walk planned as nation grapples with latest residential school discovery

LONDON, ONT. -- A healing walk is planned for July 1 in Victoria Park in London, Ont. to honour the victims of Canada’s residential school system.

The walk comes as the country learns of an additional 751 unmarked graves at the Marieval Indian Residential School in Saskatchewan.

At a press conference Thursday Chief Cadmus Delorme of the Cowessess First Nation stressed that the findings were not from a mass grave but rather unmarked graves where headstones had been removed.

The finding comes less than a month since the remains of 215 Indigenous children were found at the Kamloops Residential School in Kamloops, B.C.

The Marieval residential school operated from 1898 to 1996 in the Qu'Appelle Valley. It was run by the Roman Catholic Church until Cowessess First Nation took over its operations in 1981.

The recent discoveries have sparked renewed calls for the Government of Canada and Roman Catholic Church to release all documents related to residential schools.

Federal and provincial funds, including $10-million from Ontario, have been promised to aid in the search for more graves at schools across the country.

On July 1 the Turtle Island Healing Walk will take place at 10 a.m. in Victoria Park in downtown London, Ont. 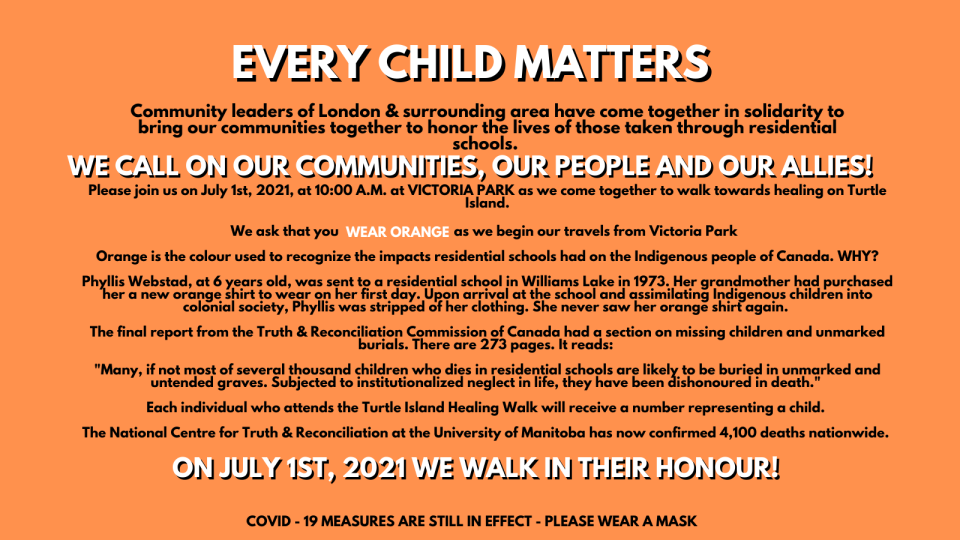 The name Turtle Island refers to the traditional name some Indigenous peoples gave to North America.

Those attending the walk are asked to respect COVID-19 measures and to wear a mask.

Attendees are also encouraged to wear orange in solidarity with First Nations peoples.