LONDON, ONT -- In early March the unthinkable happened to Rebekah and Stephen Caslick when their four-year-old daughter passed away suddenly after taking a nap while fighting a cold.

Since then the family has been living day by day with their loss and grief, keeping Jillian’s memory alive with posts of photos and videos online.

However, a London Police detective, with the gift of his time was able to preserve something special for the family.

“We miss her, we miss her face and being able to hold her and touch her little cheeks, so this kind of gives us that little opportunity to feel like she is with us in just that tiny way,” said Rebekah of the face print the detective made from one of the windows in the home.

Rebekah and Stephen knew that Jillian loved to press her face against the windows in the home leaving fingerprints and face prints on them.

“We would be upstairs playing and she would see mommy pull into the driveway and she would go and kiss the window to try to get her attention,” said Stephen.

One night, during a recent thunderstorm the couple sat to watch her face light up on the window during the lightning flashes.

“It was this devastating beauty that we were sitting in front of kiss marks from our daughter on the glass and we were watching this beautiful storm,” said Rebekah.

Family friend Kim Hunter knew there had to be a way to preserve the markings and so she reached out to the London police.

A detective was soon at the house and began collecting the prints off the window. He made a total of three prints, including her face, and gifted them to the family.

“It goes along with all the memories and it’s so amazing to have these and we are just very thankful to the police force who came out and did it,” said Stephen. 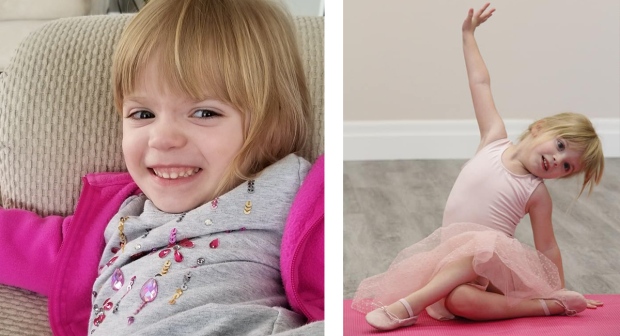 “We are all part of this community. We don’t just work here we live here and we raise our families here. To be able to bring this kind of a forever treasure to this family is nothing more than we would want for ourselves.”

The family may never know exactly why Jillian passed away, but the cause of her death has been determined to be natural.