LONDON, ONT. -- It’s relied upon by thousands of vulnerable Londoners, but a key social services agency in the city’s Old East Village has been forced to temporarily close its doors after a second act of vandalism this week.

“I think we felt a little depleted because we regrouped earlier this week and we carried on,” said Anne-Marie Sanchez, the manager of strategic projects at the Intercommunity Health Centre. “When this happened again last night it was hard, it was hard to take.”

Staff at the Dundas Street health centre were busy Friday cleaning up after several windows in the front were smashed out Thursday evening. They were new replacement windows after multiple windows were knocked out on Monday.

Total damage from both incidents is estimated at $40,000. One person has been arrested in connection to both incidents according to Greg Nash, the centre’s client services manager.

“We’ve been a hallmark in this community for 30 years and served the most marginalized and most disadvantaged in our community,” said Nash. “It’s a shame that we’ve been targeted and this has happened over the last week.”

The front is boarded up, and there are printed signs redirecting those with appointments to see their pharmacist ,or call 911 if in distress or in need of urgent medical help. 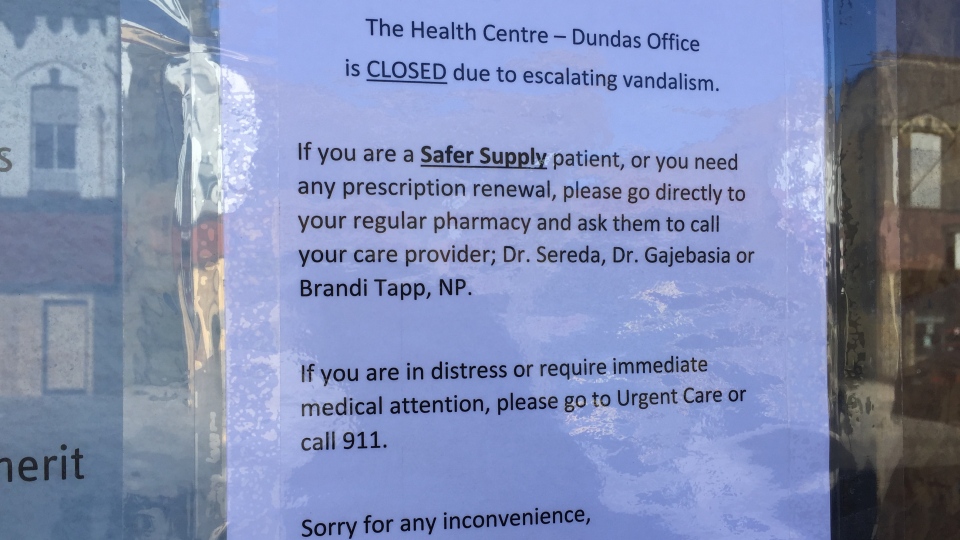 Client George Quackenbush, 62, rolled up in a taxi and used a walker to get to the door for his regular Friday doctor’s appointment. That’s as far as he got.

Appearing confused and unaware of what had happened, he peered into the window of a locked door, then walked away upset.

He said the health centre is very important to his everyday needs.

“Supplies my medical needs, my mental health situations. I have counsellors to talk to. They provide me with a housing list where you can find an apartment and any places for rent.”

He was later relieved to learn that he could attend a nearby pharmacy to have his immediate needs served, instead of seeing his doctor on this day.

The Intercommunity Health Centre has about 10,000 clients, and directly serves 200 to 300 people per day who come through its doors.

“The reality is we never shut down one day during the pandemic,” said Sanchez. She said they’re determined to reopen next week.

“We know we have a very clear purpose to serve our clients, and we’ll be back on Monday.”