'We are incredibly saddened': 15-year-old falcon, Thunder euthanized due to suffering 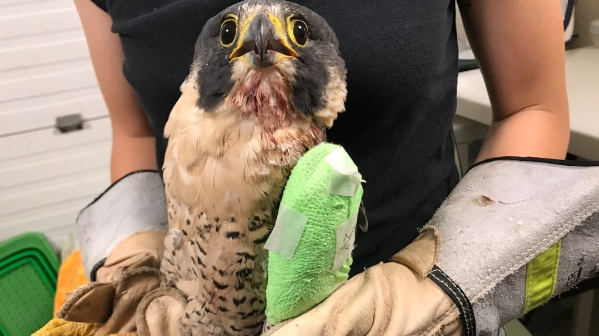 Thunder, a 15-year-old falcon had to be euthanized Sunday October 18, 2020 due to suffering (Source: Instagram - Salthaven_Org)

LONDON, ONT. -- The team at Salthaven Wildlife Rehabilitation Centre delivered some sad news via an Instagram post this morning, that 15-year-old falcon, Thunder, has been euthanized.

"Thunder the peregrine falcon who graced the skies of downtown London for so many years has had to be euthanized," reads the Instagram post.

The team at Salthaven detail the events, saying Thunder was rushed to the Ontario Veterinary College in Guelph on Thursday after they found a bit of blood on her perch.

Later, X-rays revealed that her seven-week fracture in her wing was not healing properly and 'it was really bothering her.

"We don’t take the decision to end an animal’s life lightly and, in this case, felt it was the most humane thing to do," says the post.

One comment reads, "Thank you for doing your best and ensuring she didn’t suffer."

Before passing, Thunder was recovering at Salthaven Centre after being rescued from the top of Citi Plaza in late July.

Brian Salt, founder of Salthaven, says the Salthaven rescue team found Thunder on top of Citi Plaza, suffering from severe wounds caused by a territorial battle with another falcon, leading to a wing fracture.

Thunder who is describes as Regal, was a high profile bird in London, loved by many.

"We are incredibly saddened that Thunder didn’t make it. We owe a debt of gratitude to the Veterinary College for their best efforts and to those of you who so generously stepped forward," read the post.