Like many homes, the City of London storm water system couldn't handle the heavy rains, backing up into White Oaks Mall.

A massive cleanup got under way Tuesday morning after the overnight storm ripped through the area.

Half of the mall was closed off for part of the day.

"It was a very heavy storm. One of those exceptional storms that you don’t see very often. It just takes a little while to clean up afterwards," says Jeff Wilson, White Oaks Mall general manager.

The problem was over-capacity storm sewers causing water to back up through the mall drain pipes.

The Argyle Walmart store was also closed for flood damage. Staff members were greeting shoppers in the parking lot to notify them of the closure.

There were also traffic problems with some signal lights not working in the city.

Justin Arcese and his friends ran into difficulty when trying to cross Dundas Street.

"We tried to cross but...we waited five minutes to see that nobody would come. A car came, tried to turn, was like, giving us some signals," he says.

Some homes in London were without hydro into the evening Tuesday.

Other homeowners were dealing with flooding, especially in older parts of the city.

Residents along Florence Street even had raw sewage backed into their homes.

This has happened to her mother-in-law, 81-year-old Beulah, seven times.

She no longer qualifies for insurance.

Mote speaks for her mother, who uses sign language: "My heart is broken. I feel fed up. I'm tired of it."

They were pleading for the city to help out.

Ruth's son Justin is hoping a private contractor will step in to help. Meanwhile, he is dealing with the mould.

"Well the water has come up almost two or three inches. And in order to remove any mould or containment, we need to remove anything that's come in contact with it all around her basement."

The city has tried to deal with a drainage issue in that area before and told Mote Tuesday she does qualify for a subsidy program. 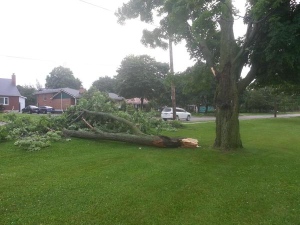