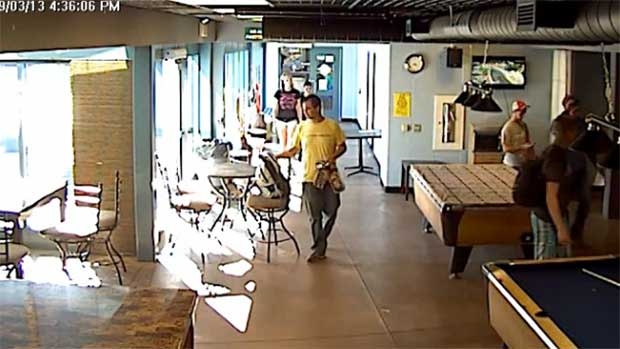 An image taken from video released by the Sarnia Police Service shows a male in a yellow shirt wanted in connection with a theft at Lambton College on Sept. 3, 2013.

Sarnia police have released surveillance video from Lambton College in an attempt to identify a suspect wanted in a theft of rings valued at around $10,000.

Police say three trays of rings were stolen from the display of a local vendor sometime after 1 p.m. on September 3.

The vendor had set up the display at the college, but found the three trays - with about 300 rings valued at $35 to $60 each - missing the following day.

Video surveillance reportedly shows the suspect taking the rings and placing them in his back pack then leaving the area for another part of the school.

The video released by police Tuesday allegedly shows the suspect retrieving his back pack from the area where he retreated after the theft.

The theft was being investigated internally by the school, but after no one was identified, Sarnia police decided to make the video available to the public in hopes of identifying the male.

The suspect is described as about 18-23 years of age, tall, with medium build and dark hair. He was last seen wearing a yellow shirt, lighter pants and running shoes.