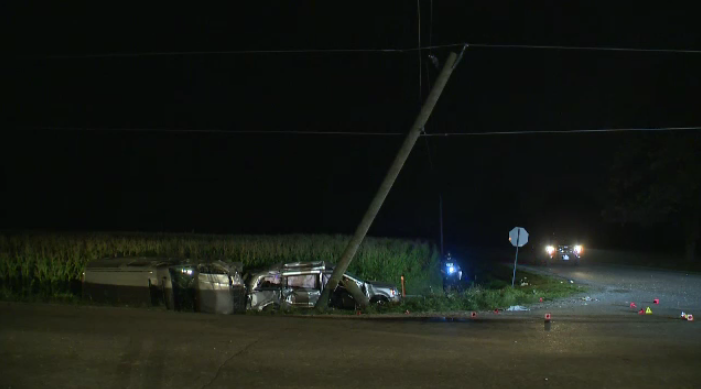 A crash near Stratford, Ont. killed two people and injured five others on Tuesday, Aug. 28, 2018.

Two people who were killed in a crash near Stratford on Tuesday have been identified.

First responders were called to the intersection of Perth Line 26 and Perth Road 122 shortly before 6 p.m. for a collision between and minivan and a sports utility vehicle (SUV).

Police say there were six people inside one of the vehicles and two of them were pronounced dead at the scene.

The deceased have been identified as Heeyul Son, 10, of Cambridge and Daniel Nadon, 2, of Kitchener.

The driver of the other vehicle was taken to hospital with minor injuries.

None of their conditions have changed at this time.

Police are still investigating but say the roads meet at a two-way, stop sign controlled intersection. It has since reopened.

Hydro crews were on scene to repair a hydro pole damaged in the collision.