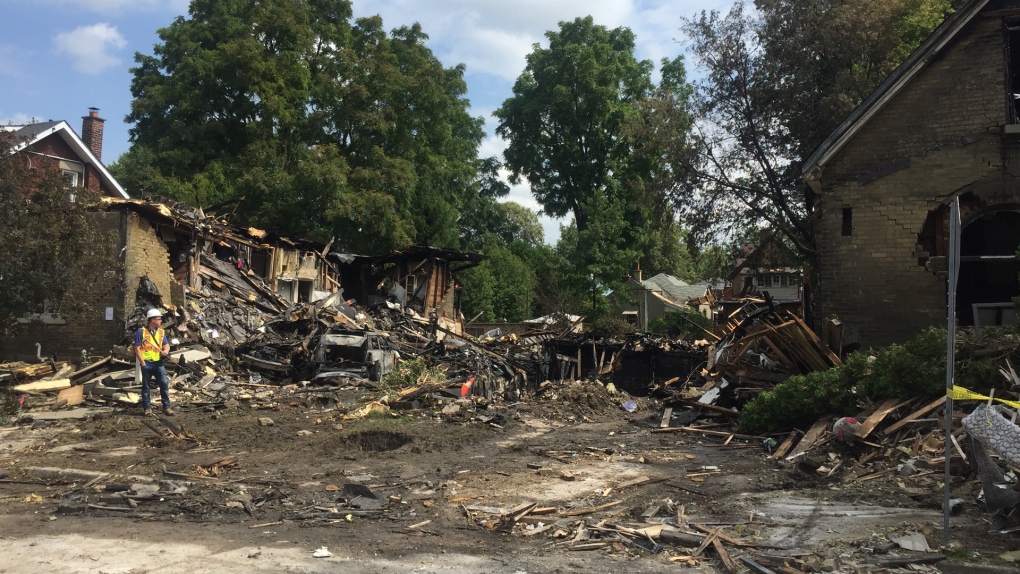 MIDDLESEX CENTRE, ONT. -- Statements delivered at the sentencing hearing for the woman who pleaded guilty in connection with the explosion on Woodman Avenue detail physical and psychological impacts that will last a lifetime.

At her sentencing hearing last week she apologized to the victims and said, "I will never forgive myself." She is set to be sentenced on Feb. 11.

Heart-wrenching statements were also delivered by first responders and residents of the Old East Village street, those whose injuries were severe and may never fully heal and others who lost everything they possessed.

One firefighter who suffered a brain injury as a result of being thrown across the street by the explosion and was then buried under debris, did not file a statement as the events remain too traumatic.

However his wife said that while the family is "extremely grateful that his injuries are not worse and that nobody died," the event has completely changed their lives.

She said her husband no longer takes part in many hobbies and activities he once enjoyed, and has lost time with family due to "processing issues and extreme fatigue."

Her husband was just over a year from retirement at the time of the explosion. In 2020 he would have also marked 30 years with the fire department, turned 60 and celebrated his 40th wedding anniversary.

She added, "The events of that night will be with him, as well as everyone else there that night for the rest of their lives."

Another firefighter from Waterloo Region who was severely injured in the explosion had only been on the job for two-and-a-half years, married for one year and had a three-month-old son.

He describes injuries that have left him permanently scarred, and continue to require treatment more than a year after the explosion, with the recovery likely to take even longer, and the impact his injuries have had on his family.

"The trauma I now carry for the rest of my career is not just limited to my physical scars. I know, to have an unprecedented incident of this magnitude happen to me, so early in my career will have a lasting impact on my mental health."

"I feel conflicted. I feel angry. I feel sad. I feel resentful. I feel hopeful and I feel grateful. I'm happy to be moving forward with building a new home for my family. A home I fear I will never feel safe in. My body still carries the feeling of your car hitting my house."

"I have been greatly impacted by the explosion. It makes me feel unsafe, and I have noticed that normal everyday experiences seem to be more anxiety inducing for me."

"When we looked up in the sky, we could see fireballs falling down on us…It was like a war zone; people walking around, crying, screaming, confused…We still have flashbacks and are hypersensitive to loud noises…The trauma is exhausting to carry. It was exhausting then and it is exhausting now."

"The screams of our neighbours as they watched their home explode will never be erased from our minds…we lost all that we had worked for and did not realize the importance that having a safe secure home was for us…Emotionally we were broken…We are incredibly thankful that we were not physically injured but the psychological impact will be lifelong. We will never forget the trauma and devastation that night has brought into our lives."

"After a year and months I still cannot live in, rent or sell…my sleep patterns are not as they used to be, tossing with frustration and anxiety due to the many loops we are jumping through to finish getting our home fixed."

"The physical damage to the neighbourhood was extensive with at least 30 homes affected…The estimated cost of the damage by the Fire Department was upwards of $15 million…Some suffer from grief and loss of sentimental items and family pets. Others are dealing with stress and anxiety caused by insurance companies and contractors as they attempt to get their lives back on track."