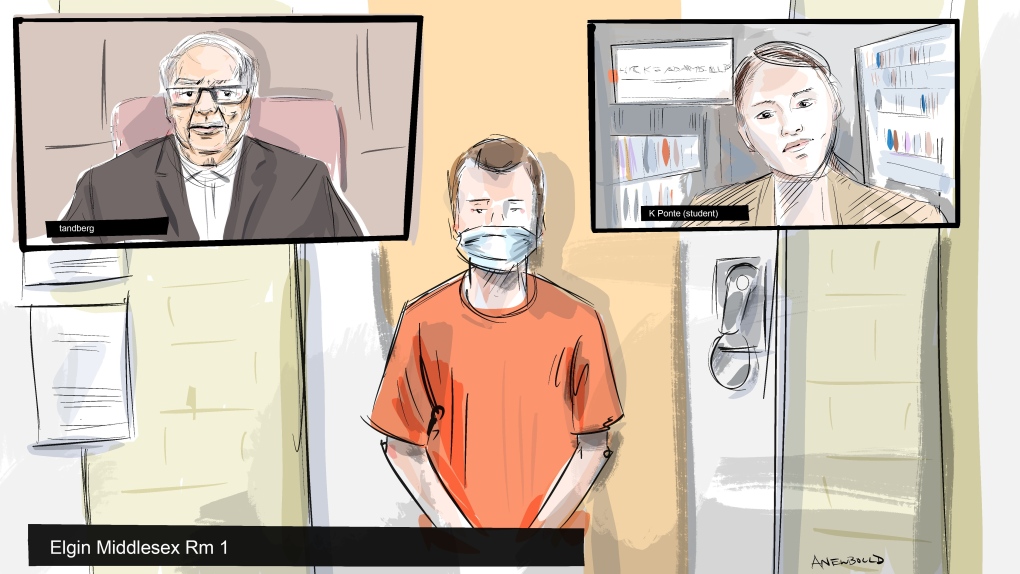 In this artist's sketch, Nathaniel Veltman, centre, makes a video court appearance in London, Ont., on Monday, June 28, 2021 as Justice of the Peace Dan McDonald, top left, and K Ponte, a student sitting in for Christopher Hicks, lawyer retained for accused, look on. (THE CANADIAN PRESS/Alexandra Newbould)

The man accused in the deaths of a Muslim London family was back in court Monday.

21-year-old Nathaniel Veltman appeared briefly via Zoom for proceedings which are scheduled to take place over two days.

A publication ban is currently in place on any evidence heard in court.

Veltman is charged with four counts of first degree murder and one count of attempted murder after four members of the Afzaal family were run down by a vehicle and killed in June 2021 as they walked along Hyde Park Road.

The only surviving member of the family, a young boy, suffered serious injuries but has since recovered.

Poilievre preferred among Conservatives, but Charest favoured by Canadians: poll

Ontario MP Pierre Poilievre remains the heavy favourite to be the next Conservative party leader but he trails opponent Jean Charest for support among Canadians as a whole.

With inflation rising at its fastest pace in nearly 40 years, the cost of everything from food to gas has skyrocketed. Canadians across the country are feeling squeezed, but big families with multiple children are at times shouldering much of the higher costs — and changing demographics and consumer patterns have left some of them more exposed to inflation than in previous generations.

Meet Wyatt Sharpe, 13, journalist who's interviewed some of the biggest names in Canadian politics

At the age of 13, Wyatt Sharpe has interviewed the prime minister, a premier, party leaders and cabinet ministers -- and he's not even in high school yet.

Former U.S. President Donald Trump will be questioned under oath Wednesday in the New York attorney general's long-running civil investigation into his dealings as a real estate mogul, he confirmed in a post on his Truth Social account.

The ingredients in a 2,300-year-old ancient Chinese chemistry formula have finally been identified, revealing new secrets about metallurgy in ancient China.