Vehicle smashes through window of pharmacy in Byron 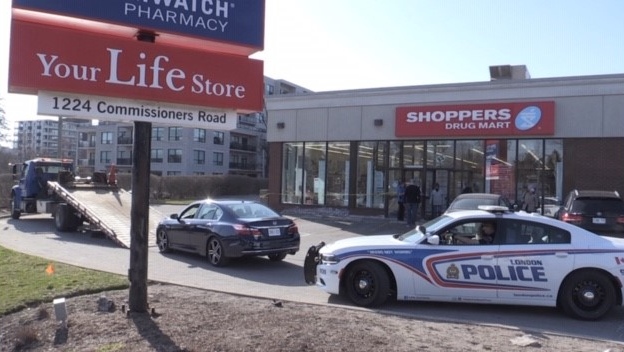 Emergency crews responded to the crash at the Shoppers Drug Mart on Commissioners Road in London, Ont., on Thursday, March 25, 2021. (Daryl Newcombe)

LONDON, ONT. -- Police, Fire, and EMS are on scene at a pharmacy in London’s Byron neighbourhood after a vehicle crashed through the window of the store.

The crash occurred just before 9:30 a.m. at the Shoppers Drug Mart on Commissioners Road just east of Boler Road.

Police tell CTV News that there are no reported injuries.

The public is asked to avoid the area and the store while emergency crews are on scene.

This is a developing story, more to come….

*TRAFFIC* Emergency crews responding to vehicle that has driven through the window of a pharmacy in the 1200-block of Commissioners Road West. Unknown injuries at this time. #ldnont pic.twitter.com/5ovCvcYQxN