A month after a judge ordered political consulting firm Blackridge Strategy to turn over client files related to a pair of websites that attacked incumbent councillors Maureen Cassidy and Virginia Ridley in Sept. 2018, the documents have been shared with CTV News.

The documents include a $1,320 invoice to Van Meerbergen for "Attack Ads against Virginia Ridley" and "anonymous website." The Ward 10 Councillor who defeated Ridley has denied any knowledge of the website.

The documents also include a text message exchange between Ward 5 runner-up Warden and Blackridge Strategy owner Amir Farahi. In it Warden asks, "Hello Amir, is everything okay, are we good?"

Farahi responds, "Everything is okay! Just doing a bit of work behind the scenes I'll be setting up the Maureen website soon."

Ridley said in a statement that she hopes the information will end a difficult period for her family.

"I only hope that we have been successful in deterring this type of behaviour in future elections and can return to civil, democratic, fair, and law-abiding practices where people stand on their own values and ideas, and not spend time or effort in unlawful, and dirty tricks to deceive voters and spread misinformation.”

In the same statement Cassidy, who was re-elected as ward 5 councillor says, "The truth always prevails. Bully tactics will not be allowed to determine who throws their hat into the ring and who doesn't. I hope that today we've proven that." 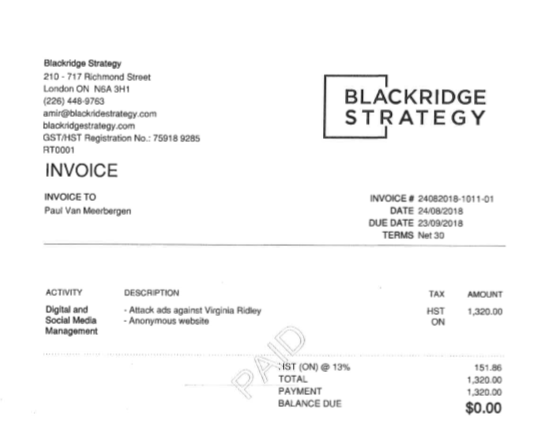 Susan Toth, the lawyer representing Ridley and Cassidy, says her clients are still examining their legal options, including a possible lawsuit.

The documents, including invoices and internal communications, were ordered to be turned over to Toth because Ridley and Cassidy are considering a lawsuit against Blackridge Strategy.

In Sept. 2018, the anonymous website virginiaridley.ca took aim at the Ward 10 incumbent. Among the claims made against Ridley, beneath a tab titled “Child Abuse,” it recounted a time when she brought her son to a municipal budget meeting at city hall.

Eventually, Londoner Barry Phillips admitted paying Blackridge Strategy about a thousand dollars of his own money to create virginiaridley.ca. But he told CTV News the site was only intended to highlight Ridley’s support for Bus Rapid Transit. He says Blackridge Strategy “hijacked” the website by adding the child abuse claim.

Phillips was a campaign volunteer for eventual Ward 10 winner, Councillor Paul Van Meerbergen. Van Meerbergen has repeatedly denied any knowledge of the website or Phillip’s actions and continued to do so Monday.

Van Meerbergern believes the invoice has been faked, saying in an email, "I can assure you that I did not receive this invoice and I did not pay it. The invoice is a complete fabrication. The explanation for it lies with the firm who produced it."

Farahi says, "I can't speak as to whether our client has seen or has not seen the invoice, what was requested from the courts, they asked us to provide invoices, contracts, any sort of emails, and we did exactly that. 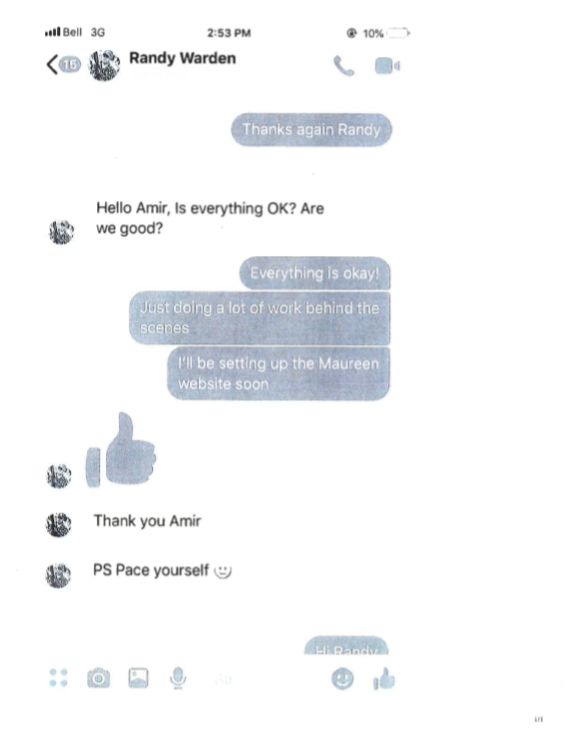 Also during the 2018 campaign, lawn signs in Ward 5 directed voters to the website maureencassidy.ca. The anonymous website questioned the incumbent councillor’s morals, including a reference to her extra-marital affair with former mayor Matt Brown.

On June 6, Ward 5 runner-up Randy Warden issued a written statement denying knowledge of the website, but admitted "agents or volunteers" had a role, he stated it was “ultimately my responsibility.” But the new documents include an email exchange where Blackridge and Warden discuss whether to include the sentence, "I accept full ownership." That sentence was not included in the final version sent to CTV News.

On Monday, Warden spoke with CTV News, saying, “I did not see what was on the Cassidy website until the public saw it. I had no input into it. I had no involvement. And now that it’s been out there, I think it’s important for the City of London to not lose sight of the fact that Cassidy has not disputed a single thing that’s been on that website.”

He also questions the grounds for a potential legal suit, “Ms. Cassidy has said that she is considering legal action. Well, I simply said Miss Cassidy, against what? You won the election. So, what are your damages? A website that was completely factual? What are your damages?”

Warden also issued an email statement that he again would, "take full responsibility for the actions by my campaign during the course of the 2018 municipal election."

However, while he says he thought it would be useful information for the public, he says he did not realize it would be part of his campaign, but believed it was being carried out by a third party.

Blackridge Strategy has maintained that the websites were harsh but accurate.

Meanwhile, Ontario Provincial Police are conducting a review. Police received a complaint that Blackridge Strategy, or some of its clients, may have violated the Municipal Elections Act by not filing as Registered Third Parties before spending money to influence the election.

Londoner John Hassan filed the complaint with police about possible violations, but is still awaiting the result of his filing.

"Here's yet another example of a community forcing the bar lower. We are accepting this kind of stuff because very few people in my mind seemed to get engaged on the initial issue, and the city didn't seem to want to take control of it."

He believes Londoners are finally realizing how serious the allegations are.

Toth has forwarded a request to Blackridge for further disclosure to be provided in accordance with the order. The statement concludes, "The time for dirty politics is over."

During the 2018 municipal election, Blackridge Strategy was co-owned by Farahi and Thames Valley District School Board Trustee Jake Skinner. Earlier this month, Skinner left the political consulting firm and offered an apology to Cassidy and Ridley.

Farahi now says, "I think our role in this was blown out of proportion...We assess each project on a case-by-case basis and then the criteria for that is deremined by any sort of standard PR and political campaign."

In a brief statement released Monday morning, Blackridge Strategy VP of Communications, Laura Blondeau, said the company has learned from its mistakes.

"Blackridge Strategy regrets misrepresenting its role in the websites as an attempt to protect clients. Blackridge has learned from that error.

"As for the information shared in Ms Toth's press release today: we were ordered by a judge to share client information on this issue and we did. That being said, we did sign non-disclosure agreements with the clients which we continue to respect."

London Mayor Ed Holder says, "This is a sad day...Politics is all about trust and integrity. That’s what Londoners expect and I think deservedly so. And whenever that trust is challenged, and I think it’s fair to say that it’s been challenged today with the information that’s come out...I think Londoners have some questions that deserve answers."

This is an exceptionally serious matter, and demands a response from those involved. Public service, above all, is about integrity and public trust. Without those values, nothing else matters. #ldnont

He also tells CTV News that he expects a response from the individuals referenced in the documents, "because we need to hear their voice...This calls out for a response to be made, just so we can clear the air. I don’t know that there are simplistic solutions, but I think we need to hear from, certainly, the councillor. I think that would be important.”

Other local councillor were also reacting on social media Monday.

Councillor Arielle Kayabaga Tweeted her support for Cassidy and Ridley saying, "Proud of @TothSusan’s work and of @MaureenPCassidy & @virginia_ridley for not backing down and getting to the bottom of things. #LdnOnt #Blackridge #Blackridgestrategy"

Still, Councillor Stephen Turner points out that, "they’re still owed due process. The penalties for corrupt practices under the municipal elections act are very stiff."