LONDON, ONT. -- A Chinese-Canadian grocery store in London that's lost business over coronavirus fears has stepped up in a big way to help the global effort to fight the virus.

United Supermarket on Adelaide Street North in London has raised $10,000 to date through customer donations to help Canadian researchers develop a vaccine for COVID-19 - now spreading around the globe.

Hundreds of donation receipts from just a dollar to five dollars have been proudly pasted to the inside wall, next to the cashier area.

“I feel so warm," says owner Joanna Jiang. “When we do a disaster, all people we unite together. So I'm very, you know warm, touched.”

The campaign began after the store realized business was suffering, as fears over COVID-19 were keeping customers away. 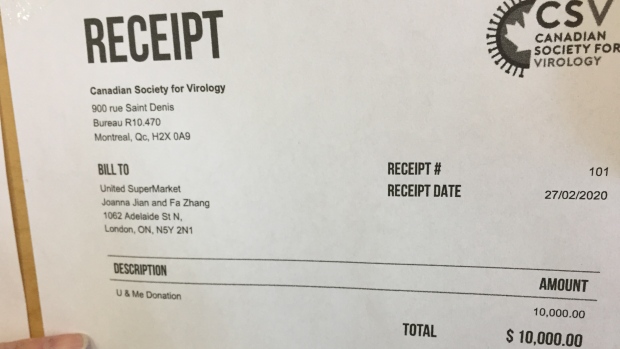 But it was a Strathroy-based ginseng farmer who gave the campaign its major kick-start.

“It's a world problem now, not just a Chinese problem, says Mario Slegers. “We need a vaccination.”

Slegers’ donation of $5,000 came after he travelled to China on business, and saw the devastation first-hand.

“If you've seen the people, the average Chinese person on the street, I'm not going to say they were lost, but they were very worried. They didn't know where to go. Didn't know what to do. It was almost heart-breaking.”

The money will be used by Canadian research labs, including the Center for Virology at Dalhousie University in Halifax, NS.

That’s according to virologist Dr. Jimmy Dikeakos, an associate professor at Western University’s Schulich School of Medicine and Dentistry, and the vice president of the Canadian Society for Virology. He says the money will be disseminated for virology research across Canada.

“They're working on vaccine alternatives, for example, with groups across the country to test vaccine,” says Dikeakos.

“So there are multiple individuals that are trying to 'A' get this virus in the lab to grow it to be able to understand how to inhibit its growth or replication. And also...to develop vaccine alternatives for this.”

Meanwhile, as fears over the coronavirus continue to take hold, business at the store is still a lot slower than normal. But the owner says that won't stop them from doing what they can to get back.

“I really appreciate all my customers,”  Jiang says, commenting on the generosity of those who shop at United.