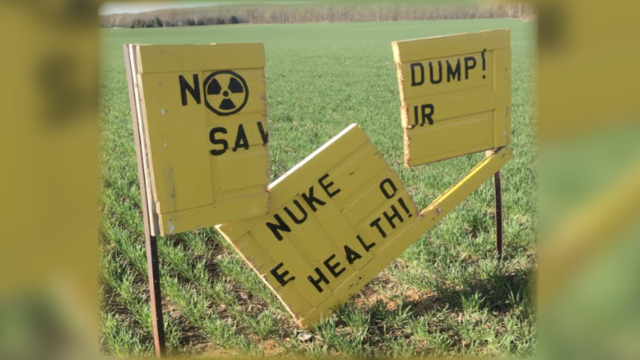 The vandalism was reported to the OPP. The signs were put up by members of Protect Our Waterways-No Nuclear Waste.

“We want to be clear that Protect Our Waterways is a very important part of the community of South Bruce and we are committed to continuing to engage with them,” says Lise Morton, Vice President of Site Selection for the NWMO.

Next week the NWMO is about to start borehole drilling at the potential site of the “deep geological repository” that could house 5.5 million used nuclear fuel bundles.

In the meantime, as a result of public input, the NWMO says they are increasing their water well sampling program in the South Bruce area, so they can better understand the baseline conditions near the potential repository site.

This is not the first time the signs have been damaged; back in October a similar act of vandalism occurred.