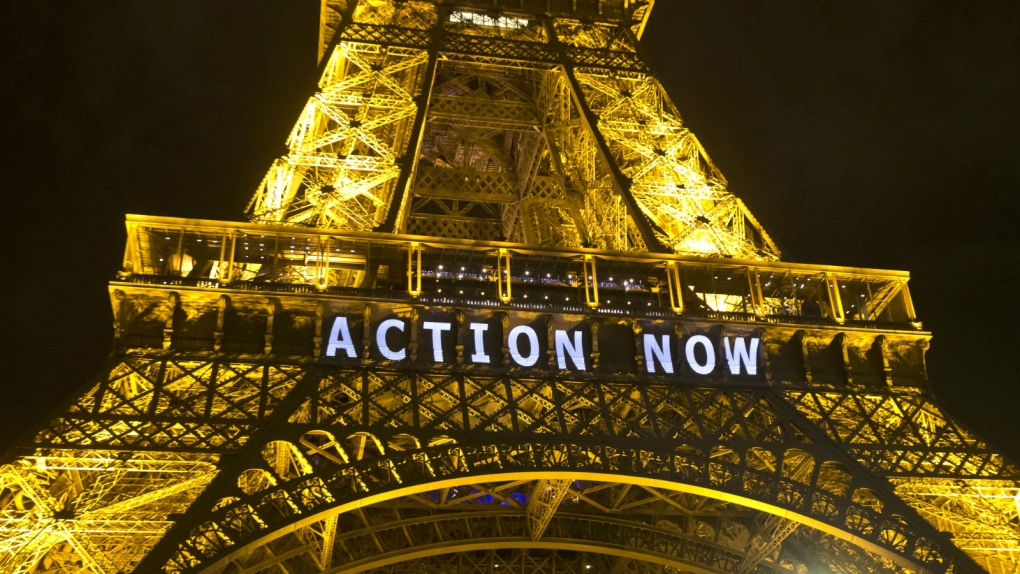 STOCKHOLM -- The world is nowhere near on track to achieve the ambitious temperature goals adopted in the landmark Paris Agreement on climate change, the UN said Thursday in a sobering report that warned of a human tragedy unless governments stepped up efforts to fight global warming.

The UN Environment Program said the world needs to slash its annual greenhouse gas emissions by an additional 12 billion-14 billion metric tons by 2030 to have a chance of limiting global warming to 2 degrees Celsius (3.6 degrees Fahrenheit). That's the temperature goal that countries agreed to in the Paris pact, which takes effect Friday after countries ratified it much faster than anticipated.

To put the challenge into perspective, UNEP noted that the gap is 12 times the annual emissions of the 28-nation European Union's transport sector, including aviation.

"The science shows that we need to move much faster," said UNEP leader Erik Solheim. "The growing numbers of climate refugees hit by hunger, poverty, illness and conflict will be a constant reminder of our failure to deliver."

Solheim said increased efforts by governments need to start with the UN climate conference being held over the coming two weeks in Marrakech, Morocco.

The 2-degree target is relative to before the industrial revolution, when scientists say humans started altering the climate system by releasing greenhouse gases into the atmosphere, primarily carbon dioxide from fossil fuels. Temperatures have already gone up by about 1 degree C since then.

In its annual emissions report, UNEP projected that annual emissions cannot exceed 42 billion tons of CO2 by 2030 for the world to have a chance to meet the 2-degree goal. But even with the reductions pledged for the Paris Agreement, emissions are set to reach 54 billion-56 billion tons in 2030, which leaves the world on a path of 2.9 -3.4 degrees C of warming, UNEP said.

Last year was the warmest on record and this year is on track to be even warmer, preliminary analyses show.

Scientists say the buildup of CO2 and other greenhouse gases is raising temperatures by trapping heat in the atmosphere. As a result, glaciers and ice sheets are melting, sea levels are rising and many parts of the world are experiencing more intense heat waves and droughts.

The 2-degree target was established as a threshold to avoid the worst impacts of climate change. But the Paris deal also set an aspirational goal of limiting warming to 1.5 degrees C (2.7 degrees F), a demand from the most vulnerable countries, such as low-lying island nations that may not survive the sea-level rise associated with 2 degrees of warming.

To have a shot at 1.5 degrees C, the world needs to slash annual emissions by an additional 15 billion-17 billion tons by 2030, the UNEP report said.

Some analysts question whether that's even feasible, given current emissions trends. Global emissions increase every year, reaching 52.7 billion tons in 2014, primarily driven by the rapid expansion of China, India and other Asian economies. China is the world's largest polluter, followed by the United States.

Emissions from fossil fuels -- the biggest source of emissions -- have stabilized in recent years, but UNEP's report said it's too early to say whether that's a temporary or a permanent change.

This year countries took another step to limit emissions by agreeing to slash the use of hydrofluorocarbons, a powerful greenhouse gas used in refrigerators, freezers and air conditioners. UNEP noted that early studies suggest the move could cut 0.5 degrees C of warming if fully implemented.