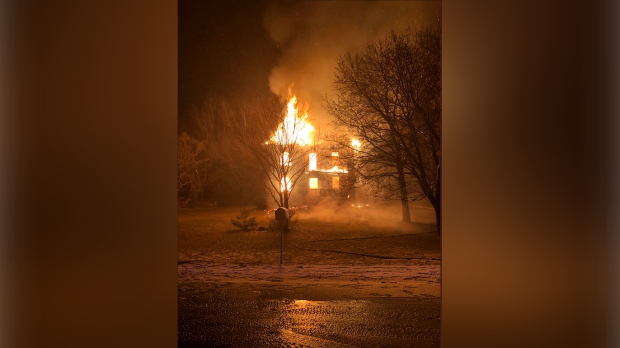 A house is shown engulfed in flames after a fire that began on Monday morning in West Perth. (Courtesy: @OPP_WR)

LONDON, ONT -- Provincial police, along with the Office of the Ontario Fire Marshal, are continuing to look into the cause of a house fire that occurred in West Perth just hours after another fire.

While the two house fires were close in proximity and time police say they do not believe the two are linked.

The fire on Perth Road 180 occurred Monday morning and remains under investigation.

The house was destroyed in the blaze, however no one was home at the time and no injuries were reported.

The earlier fire happened near Mitchell on Perth Road 164. One person was taken to hospital with minor injuries in the incident.