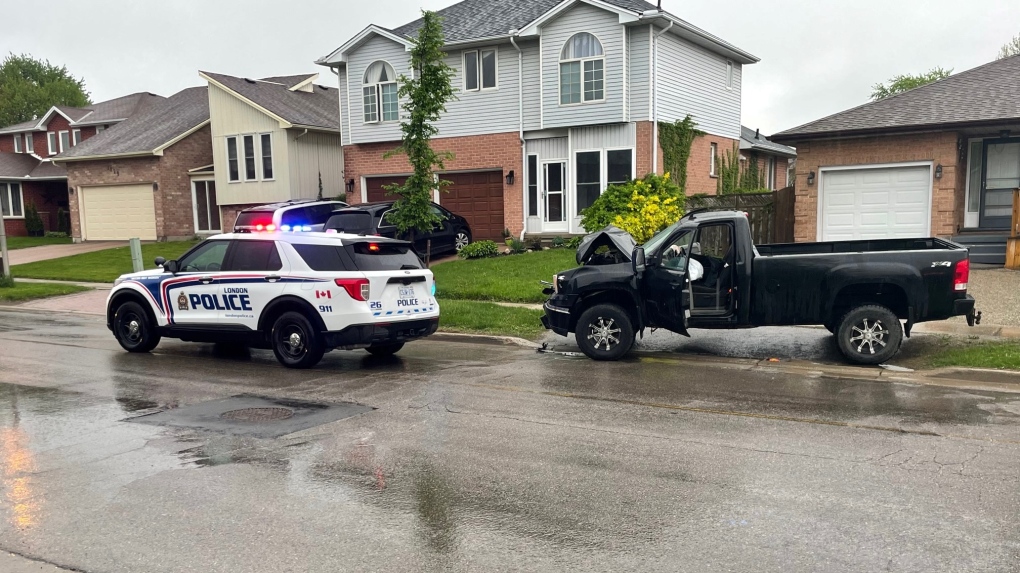 Two suspects are facing a slew of charges in relation to two stolen vehicles on Monday — one of which was a pick-up truck that struck a school bus in London, Ont.

The London Police Service (LPS) says that shortly before 8 a.m., two suspects — a man and a woman — entered a residence in the 1700-block of Jalna Boulevard and robbed the occupants of the home of the keys to their vehicle.

The suspects fled the area travelling southbound in the stolen vehicle and London police were contacted shortly after.

Law enforcement of other jurisdictions were later notified and provided with a description of the stolen vehicle and the suspects.

During the course of the investigation, police determined that the two suspects involved in the break and enter and robbery were the same suspects involved in a car crash where a stolen pick-up truck rear-ended a school bus in the area of Jalna Boulevard and Josselyn Drive.

Following the collision, the two suspects fled the scene on foot.

LPS say there were no children inside the school bus at the time of the incident.

According to Middlesex OPP, police were later sent to an address of Brigham Road, east of Mount Brydges, shortly after 9:00 a.m. following a report of another robbery and stolen vehicle.

Police later attended an intersection of Haskett Road and Nairn Road near the town of Parkhill, Ont. following a report of a single-vehicle collision involving the car stolen from Brigham Road.

OPP say that the two suspects were arrested Monday afternoon in Parkhill.

A 29-year-old man of no fixed address has been charged under the Criminal Code and Highway Traffic Act with the following:

Meanwhile, a 28-year-old woman with no fixed address has also been charged under the Criminal Code with:

Both individuals have been held for a bail hearing.

The federal public safety minister says he is 'deeply committed' to enhancing oversight of the RCMP by strengthening the role of the national police force's management advisory board.