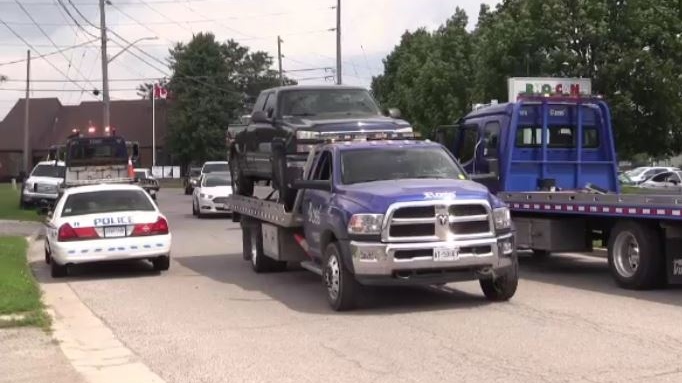 A pickup truck is towed after a police search of a business in east London, Ont. on Monday, July 29, 2019. (Gerry Dewan / CTV London)

Police have two men in custody in connection with a warrant executed Monday that turned up stolen vehicles and firearms.

Officers searched a business on Industrial Road and seized four guns, two pickups, a motorcycle and frames for an ATV and motorcycles.

Two men have been arrested and and police are still searching for 38-year-old Michael Raymond Grebenchen of London and 22-year-old Miranda Bassie of Ingersoll.

Police became aware of the stolen items after an officer noticed a motorcyclist without a helmet travelling at a high rate of speed Sunday morning on Industrial Road south of Oxford Street.

The motorcycle was abandoned near a pickup truck in a parking lot and a man was arrested. A second male seen fleeing was also arrested without incident.

Police say the motorcycle had been stolen from a London address and the pickup from Ingersoll, both on Saturday.

A 37-year-old London man and a 22-year-old Ingersoll man are facing charges including multiple counts of possession of property obtained by crime as well as drug and firearms counts.

Grebenchen is facing charges of possession of property obtained by crime and firearms counts, while Bassie has been charged by warrant with firearms offences.

Investigators say the business and its owner weren't directly linked to the stolen property or the weapons.

Anyone with information is asked to call London police or Crime Stoppers.