Police were called to the area of Briar Court and Thistlewood Drive shortly after 1 a.m. Tuesday and set up a perimeter after gunfire was reported.

London police Const. Ken Steeves says three vehicles were hit by gunfire, but it remains unclear how many rounds went off.

Police say a 32-year-old man who neighbours identified as Joe Haddad and a 48-year-old man were being held, but so far no charges have been laid.

The investigation continues but there are reports the incident was triggered by a dispute between neighbours.

Those who live on the quiet cul-de-sac were shaken by Tuesday's events.

Resident Michelle Hauth, a mother of two, says, "We are a very close-knit group on the street and nothing like this has ever happened so it's just very upsetting."

Police say no one was injured in the incident, however Steeves adds, "There was potential for something worse to occur, but thank goodness it didn't." 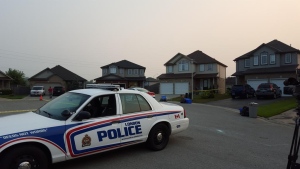