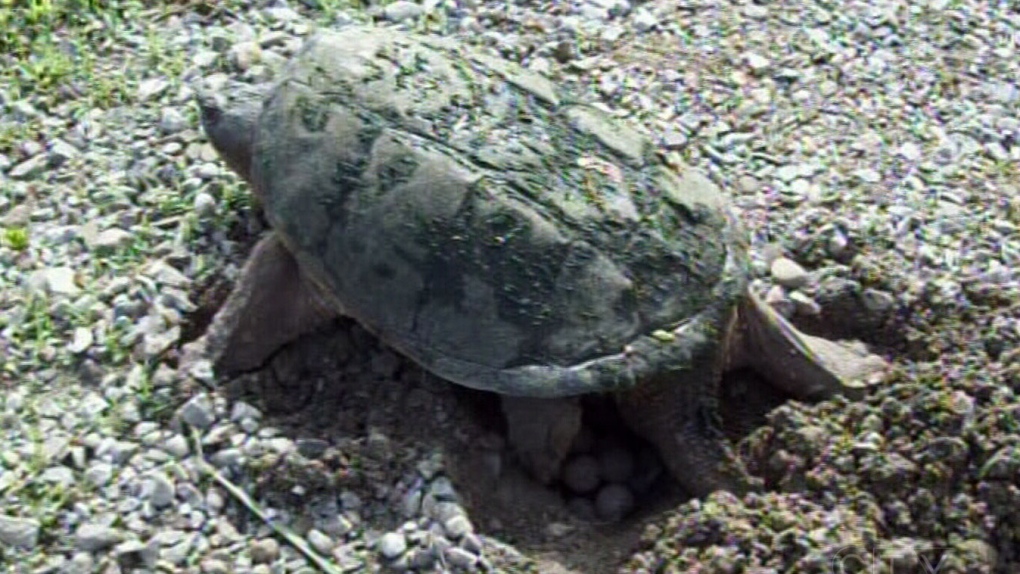 TORONTO -- Turtle populations in southern Ontario are under threat by poachers, who sell the critters on the black market as aquarium novelties or for the dinner plate.

Ron Brooks, who studied turtles in Algonquin Provincial Park for 40 years, said there are no statistics on the number of turtles being poached and sold in the illegal wildlife trade.

But he said it appears that poachers will collect turtles and sell them to ethnic markets for delicacies such as turtle soup.

"It's very difficult to find out what's going on," Brooks said.

Eight species of turtles live in Ontario, seven of which are considered at risk. Two of these species -- the spotted and wood turtles -- are classified as endangered.

For turtle researchers, the risk of poaching prompts them to take precautions.

Brooks said in studies and reports, researchers remain purposely vague about where the populations of turtles are concentrated.

"These traffickers read the reports and read scientific publications to find out where the turtles are," he said.

At the same time, he said, wildlife smugglers will import certain species of turtles to sell as pets in Ontario.

Johnson added that in one example of wildlife trafficking, a man from the eastern Ontario community of Cobden was importing turtles across the U.S. border.

The man was sentenced last year to a 90-day jail term to be served on weekends and ordered to pay $50,000 to the Environmental Damages Fund after he was found in possession of three containers of reptiles.

The containers were smuggled into Canada near Cornwall, Ont., and officers seized 205 animals including various species of turtles, tortoises and lizards.

Joe Crowley, who is an at-risk species specialist at the Ministry of Natural Resources and part of the Canadian Herpetological Society, said the ministry's enforcement officers have been involved in several "large international investigations."

"Turtles are definitely in pretty big trouble in Ontario," Crowley said, adding that there are various contributing factors, such as loss of habitat and road mortality.

Crowley said turtles have low reproductive rates, so the deaths of adults can be detrimental to a population.

"Poaching is an especially problematic threat for the rare species, the ones that have high demand in the pet trade," he said. "A single poaching event could theoretically wipe out a population."

He added that this has happened in Ontario with wood turtles, where poaching events made the population "non-viable" and required intense conservation efforts.

"The (adult) population was reduced by probably about 70 per cent," he said, adding that people should report suspected poaching behaviour to the ministry.

Brooks pointed out that while turtles are protected under legislation, there is a "paradox" when it comes to snapping turtles.

"They are listed as at risk," he said. "But there's a regulation that you can hunt them if you have a fishing license, which is anybody."

On Tuesday, a man who was pulled over by police in Brantford, Ont., for a vehicle violation admitted to having a nine-kilogram turtle in the trunk of his car.

Officers said it was later released into the Grand River, and the police didn't investigate the man's possession of the turtle.

Brooks and fellow researchers have petitioned the Ministry of Natural Resources to change the fishing regulation to protect snapping turtles.

He said while attitudes are changing, turtles are still not well-enough protected.

"I think the penalties are harsh enough but they're not applied," he said, adding that he first saw turtle poaching in the 1980s around Algonquin Park. "The judge just laughed when we found guys poaching turtles in the park."

Researcher Jacqueline Litzgus said she has been observing a population of spotted turtles in decline over the last decade, despite a "pristine site" that wouldn't lend itself to habitat loss or issues of road mortality.

"I've just noticed my turtles are gone," she said, adding that "incidental take" could be an explanation.

This occurs when members of the public, possibly children, take one turtle at a time, she said.

"Poaching has a couple of different flavours," she said, adding that even taking one or two turtles can damage an entire population.

Litzgus added that it's important to look at turtles as an "umbrella species."

"When you protect habitat for all the functions that a (turtle) needs, by domino effect you end up preserving that ecosystem for so many other things," she said. "By protecting them, we protect everything in that wetland."