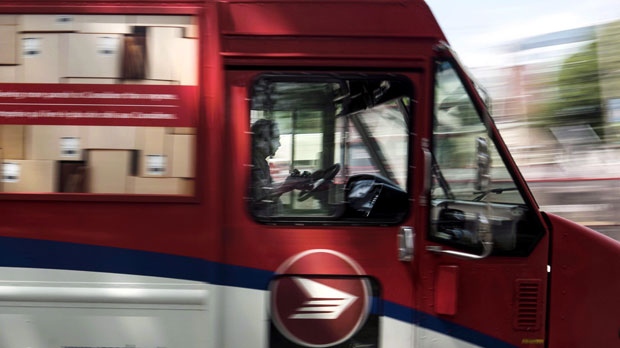 OTTAWA -- Prime Minister Justin Trudeau is giving indications that his patience is running out for Canada Post to reach a contract settlement with its unionized employees as rotating strikes continue.

Trudeau says his government might soon act to end the dispute if the Crown corporation and the Canadian Union of Postal Workers can't bridge their differences.

Trudeau commented on the dispute today as CUPW members expanded their rotating walkouts to dozens of locations across the country, including in Quebec, Ontario, British Columbia and Nova Scotia.

The job actions have temporarily shut down Canada Post's operations in more than 150 communities since being launched last month.

The Liberals have until now said they preferred to see contracts reached through collective bargaining.

To help in that process, Labour Minister Patty Hajdu appointed a special mediator in the Canada Post dispute a little over two weeks ago.

Morton Mitchnick's mandate has been extended until Sunday but Trudeau said he wants to see progress in the talks, hinting at legislative action if there is none.

"Christmas season is approaching and we know that's when Canadians use Canada Post more than at any other time," the prime minister said Thursday as he entered the House of Commons for question period.

"Of course, management and the union both know this."

"But if we don't see significant resolution shortly, all options will be on the table for resolving this."

The two sides have been trying to hammer out agreements for nearly a year with no success.

Canada Post said earlier Thursday it was dealing with a large backlog of undelivered packages as a result of the rotating strikes, which it said had grown after its largest processing centre in Toronto was shut down Wednesday for a second time in three weeks.

The agency's Toronto sorting facilities are hubs for mail and parcel deliveries across the country and were shut by the union for two consecutive days in October.

CUPW has said its key demands include job security, an end to forced overtime and overburdening, better health and safety measures, service expansion and equality for rural and suburban mail carriers with their urban counterparts.

Along with the rotating strikes, the union has called on its members to refuse overtime, including working during the upcoming Remembrance Day long weekend.

Canada Post has maintained it made "significant offers" to its workers that include increased wages, job security, and improved benefits, with no concession demands.