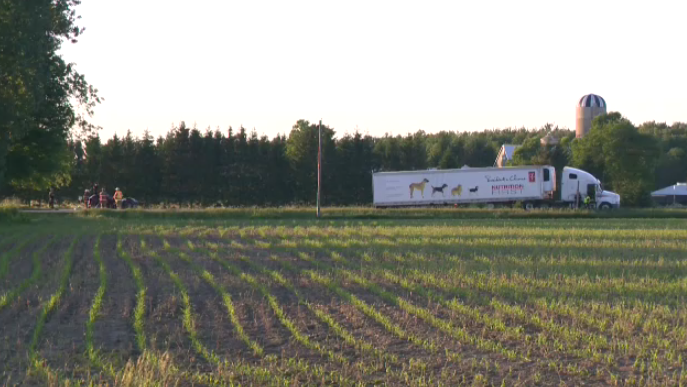 A Brampton, Ont. truck driver has been sentenced to four-and-a-half years in jail in connection with a 2019 collision that killed three members of a London family.

The crash happened in June of 2019 at Fordwich Line (Perth Line 88) and Perth Road 178 north of Listowel.

A two-year-old boy in the vehicle with them had non-life threatening injuries.

Police determined the transport truck went through a stop sign at the intersection.

Gurvinder Singh was originally charged with three counts of death by criminal negligence.

Along with the four-and-a-half year jail sentence, Singh was handed a five-year licence suspension.

Trudeau vows to 'get back to work,' as Liberals win election but fall short of majority

Liberal Leader Justin Trudeau is vowing to get 'back to work,' after being dealt a second minority government in the 2021 federal election that looks much like the one Canadians elected in 2019.

Liberals return to Alberta, and 5 other surprises in the election results

CTVNews.ca looks at some of the biggest surprises of election night, including the ouster of three cabinet ministers.

NDP may hold the balance of power in Parliament

Jagmeet Singh and the New Democrats may hold the balance of power in the next Liberal minority government by playing a key role in helping pass confidence matters and key legislation.

OPINION | Don Martin: Sooner or later in this status quo mandate, Justin Trudeau will take his walk in the snow

It might take a year or longer before it becomes clear to him, but Prime Minister Justin Trudeau will eventually realize he’s finished, Don Martin writes in his exclusive column for CTVNews.ca.

Much of the country is waking up to 'more of the same' Tuesday morning after Canadians re-elected another Liberal minority government in the 2021 federal election.

OPINION | Tom Mulcair: Voters sent a chastened Trudeau back to his job with a stern warning

All of Canada has just repeated a message sent loud and clear to Justin Trudeau two years ago: 'we don’t trust you with a majority,' writes former NDP leader Tom Mulcair in an exclusive column for CTVNews.ca.

The Conservative Party has come up short, failing to dethrone the now three-term Liberal Party. Leader Erin O'Toole conceded defeat in the early hours of Tuesday morning, after the Liberals secured a minority government win.

Here's what Trudeau's Liberals have promised for their third term

Liberal Leader Justin Trudeau and his party have won a minority government on a platform of promises that included billions of dollars in new spending to rebuild the country from the COVID-19 pandemic.