Tribunal rules in favour of developer over residents in Port Stanley

The Local Planning Appeal Tribunal (LPAT) ruled in favour of Prespa Homes, 17 months after a three-day hearing was held in March 2019.

"It's a nightmare for us as neighbours," says Arturo Martinez, who lives on nearby Second Street.

LPAT member Anne Michelberg ruled that the development complied with the Elgin County and Central Elgin Official Plans. She also felt there would be no shadow impact on neighbouring properties and that site drainage would be effectively dealt with.

"It was quite a disappointment actually because we fought for a really long time," says Doris Gingell, who has lived right next to the lot for 33 years.

"The entrance is going to be right in front of our house and that leaves us with only one option. We are now looking for a place to move to because this isn’t a place where we can enjoy our retirement now."

Residents acted as participants in the tribunal hearing last year and expressed their concerns. They were disappointed to recently find out they had lost their battle to stop the development.

"Change can be good and we have to move forward, but to build such high density it concerns me," says Della Wilson, whose backyard faces the lot.

"We can't stop it, but a little less density would have been easier to accept. If he would leave us an easement, so we could cross his parking lot to get to the beach without walking around the entire neighborhood, It would be a little easier to accept the development." 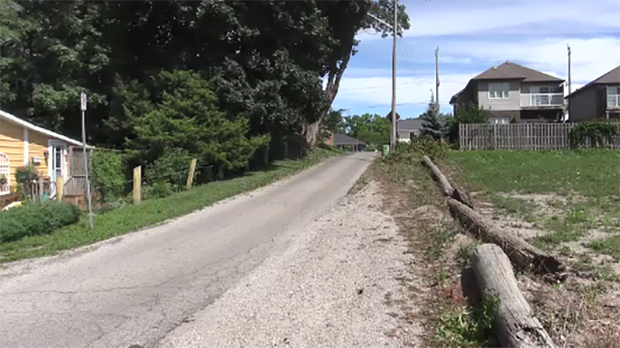 There are a few stipulations that still need to be met by the developer:

"The emergency exit they are still working on because that has to be agreed between the corporation and the municipality," says Sally Martyn, mayor of Central Elgin. "There is negations right now for that emergency access. OPP is provincial, ambulance is Elgin County and fire is Central Elgin, we have to get permission for all those different groups to use that access through the condominium to the west."

As for the widening of First Street, Martinez doesn't believe they can fit two lanes, plus a sidewalk in that tight space. He is also concerned about the emergency access.

"If you've ever been here when EMS or the fire department has to come in here, it's almost impossible," says Martinez. "How're we going to going to deal with this building, and this community, when this is a dead end, and (there's) no access any other way."

CTV News spoke with Prespa Homes owner Frank Schreffi who didn't want to speak until everything is official. He did say he would have been happier if no conditions would have to be met, but did expect the favorable ruling.

"Central Elgin is moving slowly right now," says Schreffi who doesn't expect a shovel in the ground for at least a couple of years.