Imperial Oil says no one was injured and all their employees are accounted for after a tower fell at the plant in Sarnia, Ont. on Tuesday night.

The company says high flaring seen from the plant was a direct result of the incident and there were several road closures through Wednesday afternoon to keep people away.

A Code 6 was issued after the tower, which was not in use and was scheduled for maintenance, fell on the site. Sirens were sounded and local authorities were notified.

Fortunately it occurred during a shift turnover, so few people were in the area of the collapse.

Rohan Davis, a manager at the Imperial Refinery, says "We were doing preparation work before we started maintenance activity. As part of that process, the tower fell. There was no release of material. We've doing off-site monitoriing."

Fire crews were brought in to spray the structure with water as a precaution.

The cause of the collapse has yet to be determined.

Imperial Oil says they are also monitoring air quality as a precaution as well.

Sarnia Mayor Mike Bradley is not satisfied with the answers he's been given so far.

"Our mandate as the primary control group for the city is to make sure that we have independent review of what happened. That we understand the potential of something that could have been much worse. That is independent of Imperial. We'll cooperate with them but we are a watchdog."

Davis says the company understands why people would be concerned, and they plan to minimize any community impact.

"[We'll] make sure we are very safe in how we progress those next steps, complete the cleanup and progress [to] the rebuild process."

Bradley acknowledges the site has an exemplary safety record, but says the city will conduct their own investigation.

"What we want to know is how old was the tower? What was the safety record? And the maintenance? It's just not acceptable to have a tower collapse near your community." 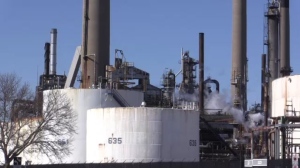