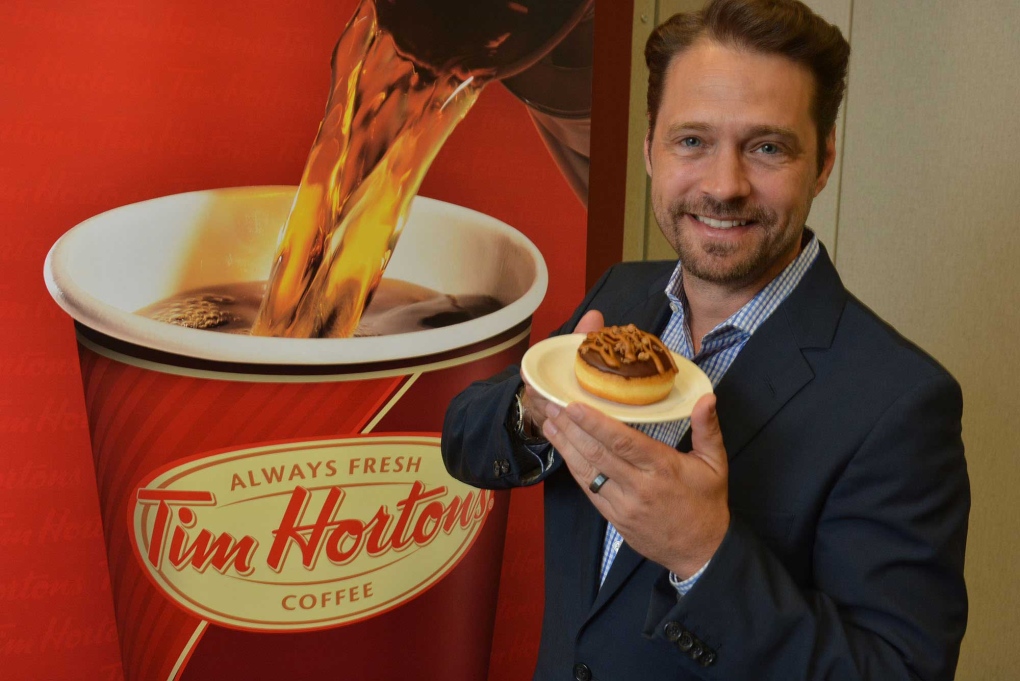 Jason Priestley and The Tortoise Torte, winner of Tim Hortons Duelling Donuts contest, created by Andrew Shepherd of Scarborough, Ont. are seen in this image provided by Tim Hortons.

TORONTO - A dreamed-up doughnut that melds together chocolate, caramel and pecans has earned its inventor $10,000 and the knowledge he beat out 63,000 entries in a Tim Hortons contest.

Toronto's Andrew Shepherd was crowned the winner of the Duelling Donuts competition Monday.

The 39-year-old dubbed his creation The Tortoise Torte, which won against the runner-up doughnut The Oreo Borealis created by Londoner Jason Flannery.

A panel of judges that included actor Jason Priestley had whittled down the pool of applicants to eight finalists, with doughnuts such as Monkey C-Donut, Monkey Do-Nut and S'more Of It.

Priestley, best known for his role on the show "Beverly Hills 90210," was recruited for the contest after a cameo on the sitcom "How I Met Your Mother" last February.

The episode joked that Canadians are a doughnut-eating people, with the Vancouver-born actor touting the invention of The Priestley donut in a fake documentary.

His namesake is a strawberry-vanilla doughnut stuffed with a chocolate Timbit.

Tim Hortons had a chef whip up the fictional pastry, and the public's reaction spawned the idea of a contest where people could submit their own doughnut ideas.